Hold on to your Steam libraries – the Kalypso Media Anniversary Sale is going strong. Yet again, bigger and better than ever before. While celebrating its 11th birthday across Linux, Ubuntu, Mac and Windows. So Kalypso Media is inviting everyone to the party. Offering discounts of up to 80% across a huge and diverse range of games and DLC. Including recent releases like Sudden Strike 4 and Vikings – Wolves of Midgard, as well as classic titles like the Tropico series, Grand Ages: Medieval and Crooks, and even on exciting digital-first titles like Crowntakers and Rezrog.

Kalypso Media is celebrating in style, with massive discounts on Steam. So for a limited time only, players can save up to 88% on Kalypso titles and title bundles. As well as a special pre-order discount on upcoming games. That Tropico 5 Collection is available with a wicked discount, Grand Ages: Medieval, Dungeons 2 and Vikings – Wolves of Midgard. All of which have my attention with huge discounts on Steam. 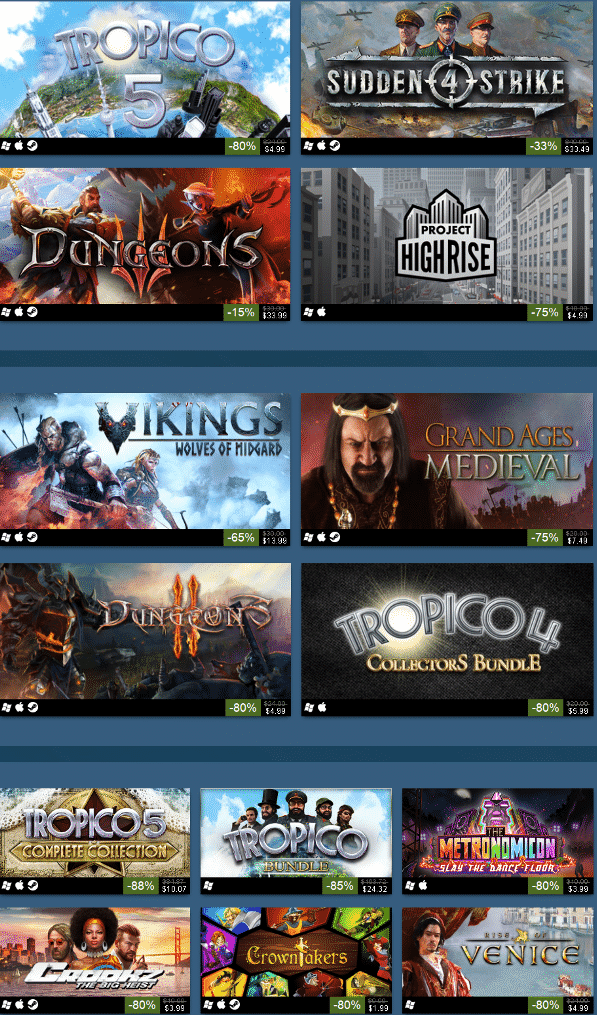 While also being able to Pre-order Dungeons 3 with to secure a 15% discount. Along with exclusive bonus content you won’t find anywhere else.

So whether you’re looking to expand your favourite Kalypso title with cut-price expansions. Or filling your library with all-new experiences. The Kalypso Media Anniversary Sale is the perfect opportunity to get great games. Since the offers are available now for Linux, Ubuntu, Mac and Windows. All part of Steam’s midweek offers. So you’ve got until Monday, October 2nd 2017 to grab some great deals on Steam and epic discounts on games.