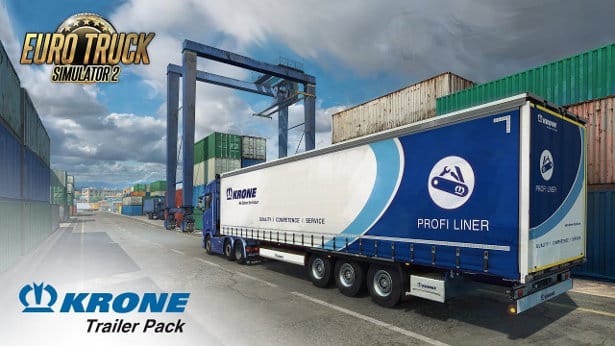 KRONE Trailer Pack hits Euro Truck Simulator 2 on Linux, Mac and Windows via Steam. Since SCS Software have the truck sim game that keeps on growing. And also proudly announcing the latest addition to the wide range of specialised DLC‘s.


The critically acclaimed Euro Truck Simulator 2 new DLC KRONE Trailer Pack is only $3.99 USD, EUR €3.99, GBP £2.99. With the 1.32 game update out now. While introducing a new set of trailers demonstrating the power of the new trailer ownership feature. Which is aesthetically pleasing and great for those who are looking to represent the brand.

Now we want to return the favor and perform another of our PR stunts as a way to say thanks, as well as to spread the goodwill coming with this new great game content. Honestly, it’s also a bit of muscle flexing in front of the transportation industry in general, as we try to demonstrate that our games’ fan community is quite relevant when they think of their target group.

KRONE Trailer is one of the major vehicle and machine manufacturers in Europe. So SCS Software are proud to bring their trailers into Euro Truck Simulator 2. Krone Trailer Pack gives you a good number of high-quality trailers for different cargo. Since this new content comes with tuning parts, cabin accessories, and paint jobs. So players can get the full detail look.