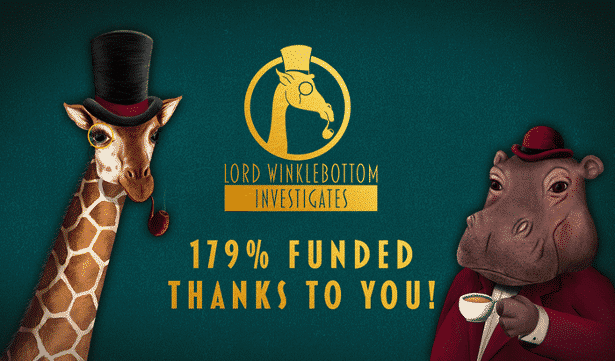 Lord Winklebottom Investigates ends well funded in Linux, Mac and Windows PC games. Thanks to solo developer at Cave Monsters. Who ended their Kickstarter crowdfunding campaign. Doing rather well. Closing out 179% funded, so not bad.

To be completely honest, I was expecting higher funding. Since the Lord Winklebottom Investigates campaign was 100% funded in just 6 days. Which now closes out with 473 backers, pledging £12,551 ($15,956 USD).

Cave Monsters also issue a statement to the community:

“Thank you to everybody who backed and shared the campaign. We’ve not only hit the main goal. But two of the stretch goals too. Which means the game will be available in 5 languages at launch. And will have some additional content for you to play too. I’m over the moon with the love and support that the game has received over the last month. Thank you all!”

Lord Winklebottom Investigates is a classic point and click adventure. That game also has a fetching hand drawn art style. With a jolly good sense of humour. Jolly is a technical term.

Taking place in the roaring ‘20s. The world’s foremost giraffe detective is here. Who is also about to embark on his most challenging case. A mysterious invitation to an isolated island. Resulting in a grisly murder. While racing against time to track down the killer. Thankfully, there’s nobody better to crack the case. The great detective and gentleman, Lord Winklebottom.

Join in Lord Winklebottom Investigates. Also the steadfast companion, Dr Frumple. While they investigate the murder of their old friend.
Since you will have to uncover clues. Grill suspects and solve puzzles to crack the case. Our daring detective will put his neck on the line. So he can to capture the killer. While uncovering the horrifying dark secret. One that sits at the heart of the Isle of Barghest.

Lord Winklebottom Investigates is due to release in May 2020. Which will be available on Linux, Mac and Windows PC.