Made in Norway indiedev’s get together for a Steam games discount bundle for Linux, Mac and Windows. So these are five of the most successful independent studios in Norway. Having now joined forces to release a bundle on Steam. Focused on story-driven games.

Since this includes some well-known studio’s. Such as Krillbite Studio, Snowcastle Games, Rain Games, D-Pad Studio and Red Thread Games.
Also, games in the bundle, called Made in Norway, are Among the Sleep: Enhanced Edition, Earthlock: Festival of Magic, World to the West, Owlboy and Dreamfall Chapters.

“We have a wonderfully friendly and sharing dev scene in Norway”, says Bendik Stang, CEO at SnowCastle AS. “This bundle enable us to help promote each others games. In a way that is only possible if we were published by the same publisher.”

The bundle will be 20% off during the Lunar New Year Sale on Steam (February 15th – 19th). Additionally, all indiedev games will be discounted on Steam during the sale: Among the Sleep will be discounted 40%, Earthlock at 50% off (no Linux support), World to the West at a 50% discount, Owlboy will be at 25% off, and Dreamfall Chapters 40%. 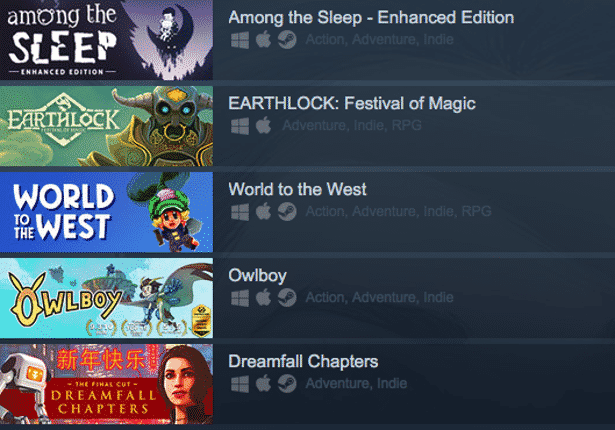 Made in Norway indiedev games (Linux, Mac and Windows)

Developed by Krillbite Studio. Among the Sleep is a first person horror adventure. Since the player character is a two year old child. The game also explores horror through atmosphere and exploration. Not with scores and combat systems: In Among the Sleep you’re vulnerable, scared, and trying to make sense of the world.

Development is by Snowcastle Games. Earthlock is an indie developed, adventure RPG inspired by the classic 3D RPGs of the late 90’s. While using a fresh take on turn based combat and character progression. Embark on a journey to save the beautiful world of Umbra.
Since this harsh planet stopped spinning thousands of cycles ago. Included is a free upgrade to the extended edition called Earthlock that will launch on March 8th.

World to the West

Developer, Rain Games. World to the West is a pulpy, cartoony top down action adventure. Since it takes inspiration from European adventure comics. Take control of four unique characters, each with their their own motivations, skills and interweaving storylines. As they seek to escape the dark shadow of an ancient prophecy

Developed by D-Pad Studio. Explore a vibrantly crafted pixel world in this flying adventure platformer. Being a mute, Otus struggles living up to the expectations of owl-hood. Things spiral from bad to worse with the sudden appearance of sky pirates. What follows is a journey through monster infested ruins, with unexpected encounters, and burdens no-one should have to bear.

Developed by Red Thread Games. The Final Cut is the ultimate collector’s edition of Dreamfall Chapters and combines all five episodes of the original game into one complete story. A story-driven 3D adventure about choice and consequence, set in parallel worlds: a cyberpunk vision of the future and a magical fantasy realm.

Between Life and Death Bundle is out now