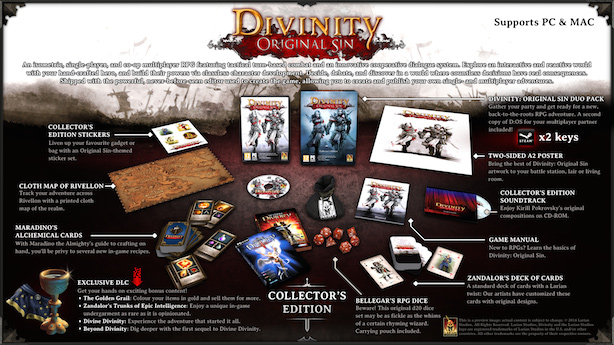 Additionally, a massive new update to the game’s beta on Steam Early Access unlocks a fully-functioning version for Mac.  PC and Mac players can now also play together on-the-go with the newly-implemented “Laptop Optimized” mode. Which means the Linux edition will be right around the corner.

About the Collectors Edition

Of the 3,000 English-language units of the Collector’s Edition, 1,500 have been claimed by Kickstarter backers.

The remaining 1,500 are available for 69.99 EUR, exclusively through the Larian Vault.

With just a couple thousand physical copies available for purchase and absolutely packed with content, the Collector’s Edition is a must-have for any Divinity fan – or any RPG aficionado – and is now available via the Larian Vault for 69.99 EUR.

See the image above for a full overview of what’s in the CE, or just click here for more details about the Collector’s Edition.

About the Steam Update

Divinity: Original Sin goes back to the roots of memorable and beloved cRPGs, featuring isometric,  party-based gameplay; turn-based combat; gripping dialogues; choice and consequence; enthralling story; profound character and party development; a big interactive world filled with characters and items; free exploration… There is one main goal, and how you get there is completely up to you. Of course, everything is more fun with a friend and so is Original Sin: drop-in, drop-out multiplayer takes care of that, both online and locally.