In MekArcade you get to pilot a giant war machine in the 37th century, and experience all the explosive, multi-pilot, online actions you can ever want. It is an expansion pack to the Cube Engine game, Red Eclipse. The 0.40 release is due in July and will be fully functional, including single pilot and multi-pilot missions, that can be played locally, online or over a LAN. Intelligent bots can join in both multiplayer and single pilot missions. There are a wide range of mission types and mutators for those missions. In addition the game has the amazing Cube engine map editor, that makes map making a breeze and even lets you edit maps cooperativly, online with your friends. That is always amazing. We look forward to joining you in battle in the middle of the 2012.

Aim: The aim of the project is to reproduce the destructive joy of Mechassault 1, using the Cube2 engine.

Background: Mechassault is a Mech shooter and was a flagship release for the much lauded Xbox Live service. The online play was some of the best. Microsoft did not supported the game well, and the future of the game was always grim. Microsoft have not made it ‘backward compatible’ to run it on the 360. It is rumored that the only reason the original Xbox servers are ran for so long was to support Halo, when they closed, the game went. The follow up game, Mechassault 2 was generally disappointing but does run on the 360 so has some future. 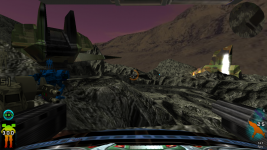 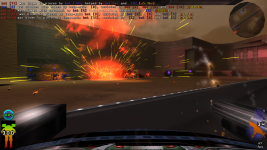 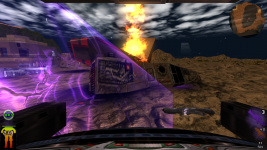 The Cube2 engine (see Sauerbraten https://sauerbraten.org ) is a well sorted out, open source, 3D, online, multiplayer, game engine that you can produce cross platform programs for Windows, Linux and the Mac. It uses OpenGL so the 360 is out, unless someone has ported OpenGL to the 360 recently. There are a number of games produced with it including some commercial ones. Perhaps the slickest of the open source games was Blood Frontier. Blood Frontier unfortunately died last year and eventually was resurrected as Red Eclipse. Red Eclipse still has not been officially relased.Please note that while the engine is open source, the content may not be. Incidentlly, you can visit the Sauerbraten page at Koders to view the source online.

Check out the gameplay of MekArcade

For more information and details. Check out Mekarcade.com.