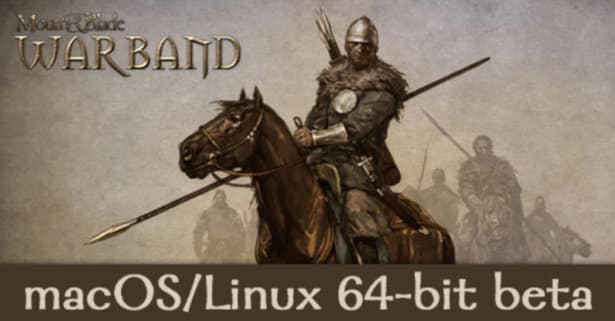 Mount and Blade: Warband launches 64-bit Beta for Linux and Mac. Since the games release was originally back in 2010 from TaleWorlds Entertainment. Ringing in a significant update for native gamers.


In Mount and Blade: Warband six realms wrestle each other for power. So which lord the player gives their favour to is up to them. Since they can choose to involve themselves with the Sultan’s cavalry in the deserts and oases of the south. Or the vast steppes of the Khergiten archers, the snow-covered kingdom of Vaegiar. The proud Axeman of the North, the Knights of Swadia and rebellious Rhodok of the southwest. Whichever realm the player chooses – with enough commitment and the local nobles favour even an adventurer of humble origin can earn his own castle.

In preparation for future updates to macOS and Linux distributions, we have made 64-bit versions of Mount and Blade: Warband available on these platforms. The builds are currently in an open beta testing phase, which players are encouraged to download and test through Steam by following these steps:

Providing everything goes to plan, we will be pushing this build out to all users after the testing phase to replace the 32-bit version that is currently available.

Mount and Blade: Warband is also a stand alone expansion pack. This is for the game bringing medieval battlefields to life with its realistic mounted combat and detailed fighting system.

So if you experience any issues with Mount and Blade: Warband 64-bit on Linux. Players can contact TaleWorlds Entertainment through a support ticket on the website. Since I have not personally tested the build just yet, you can take part.

Mount and Blade: Warband is available on Steam, GOG and Humble Store. Also priced at $19.99 USD for Linux, Mac and Windows.