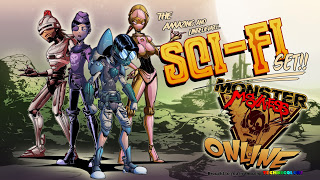 Last week Nom Nom Games has revealed its latest project, Monster Madness Online. A game that comes from the creators of Dungeon Defenders, an #RPG #Shooter that takes place in the Monster Madness universe of four high school slackers taking on hordes of monsters. The game will #release in May 2014 for PC, Mac, Linux, Android and Web Browser.


From the Press Release

Nom Nom Games, a newly formed indie subsidiary of Trendy Entertainment, today unveiled its first studio project, Monster Madness Online. Developed by the masterminds behind Dungeon Defenders, this new F2P Action RPG Shooter set in the Monster Madness universe sees the return of four high school slackers who demonstrate exceptional monster-bashing skills.Developed for cross-platform gameplay across PC, Mac, Android, Linux and iOS, Monster Madness Online is also optimized for Web Browsers and is the first game to utilize “asm.js” technology pioneered by Mozilla where the game’s code is optimized for Javascript to run directly in the Web Browser without any plugin or signup requirement. The full game release is slated for May 2014, but players can jump into the fray now – December 19, 2013 to help test the cross-platform service technology via the pre-alpha, multiplayer PvP (Windows, Mac, Linux, Android, and Web Browser only).

The citizens of Suburbia City were caught totally unprepared for the Martian invasion! Harnessing the mystical power of Monster Tokens, evil extraterrestrials sucked all of the town’s adult inhabitants into the Void, paving the way for the Invasion’s second phase, a new Monster onslaught intended to weaken the Earth’s remaining defenses. What these atrocious aliens didn’t reckon on, however, was the Monster Tokens’ inability to affect anyone under 18. Saved from another hellish day at High School (“Go Wildcats!”), our four heroes — Zack Fowler (the Nerd), Andy Gomez (the Skater dude), Jennifer Sweeney (the Cheerleader), and Carrie Rosenberg (the Goth) — are ready to take back their town from the interlopers. It’s time to team up, gear out, craft some weapons, and get hunting!

Monster Madness Online provides a frictionless online browser gaming experience by being the first game to utilize Mozilla’s “asm.js” where the game’s code is optimized for Javascript compiler to run directly in the Web Browser without any plugin or signup requirement. This is made possible by cutting edge Mozilla-pioneered technologies that combine to make the browser a high-end gaming platform, extending the reach of Monster Madness Online to hundreds of millions of players regardless of operating system.

Check out Monster Madness Online for more information on the game.