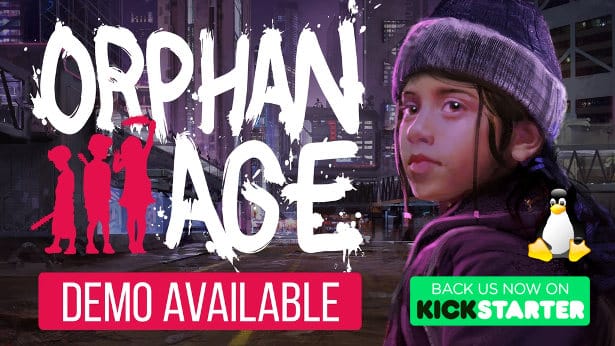 Orphan Age is a dystopian take on the life sim genre for Linux, Mac and Windows. Where players do not take on the roll of soldiers of war, but as the children left behind. A unique game that is now 62% funded, with a crowdfunding campaign goal of $29,050 USD by Fri, June 29 2018.


On which platforms is Orphan Age available?

“Right now, it’s only for Windows yet GNU\Linux and MacOS are in test and we are confident in our ability to deliver on this platform durin Early Access.

We have planned to make a Linux port, it will be done in few months and during early access at the latest. We do not have enough testing devices, that’s why it isn’t already made and we’ll need the help of our community to make sure it works well on Linux.”

The games built in Unity 3D, so a Linux would be a given. There is also a Free Demo (Windows) available, which is playable via Wine.

Orphan Age is set against the backdrop of an unforgiving, neon-lit cyberpunk warzone. So your only battle is the fight for survival. While scraping out a living in the face of extreme danger as war engulfs the world around you. Sounds interesting’ish, right?

The games design is somewhere between The Sims and This War of Mine. Personally this players closer to This War of Mine but in a different aspect. Since you have to guide a band of orphans, each with their own skills, emotions, strengths, weaknesses, and fears. Takeing them through a bitter struggle for survival in a dangerous and ever-changing city.

Constantly balancing risk and reward, you must make the big decisions to ensure the group stays alive. Build up your base, scavenge, craft and venture out into the city for new recruits, whilst ensuring there are enough supplies to keep going, even when all hope seems lost.

So for year, developer Studio Black Flag point the missing a Sims-like genre. Since, “It has always baffled us that The Sims, despite its success, never gave birth to a genre.” This said according to the campaign. And it’s also true. There is nothing really like this type of gameplay. Well not directly.

Orphan Age plays as a single player campaign. Including a lot of replayability taking inspiration from the 4X genre. But there’s a twist.! Since 4X stands for Exploration, Exploitation, Expansion and Extermination. In Orphan Age, but Empathy is replacing Extermination, bending the 4X genre into a 4E.

Ready for a Linux graphics improvement?

Therefore this is a hardcore take on what the Sims would look like. Which is where the idea of Orphan Age was born back in 2009. Hence a deep micro-simulation within an unforgiving world.

The dystopian life sim on Kickstarter

Orphan Age is doing well in the crowdfunding campaign on Kickstarter. But the game also comes with definive support for Linux, Mac and Windows.