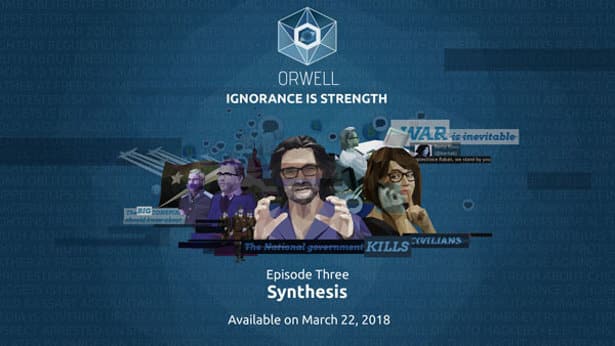 Since Episode Three: Synthesis sees the investigation into controversial Pargesian blogger. Raban Vhart becomes intensely personal. While culminating in an explosive media war for the control of public perception. Agents will not only be given the power to both uncover and influence.
While presenting how the facts are put forth. But also deciding whether the truth is sacred or ignorance is strength.

So this is the finale. Also dramatic conclusion to season two. Arrivinig with the release of Episode Three: Synthesis. Therefore, if you own the game, be sure to download the Steam update. And unlock the episode in your game.

Set parallel to the events of the original season. Orwell: Ignorance is Strength has players take on the role of a government official. As a recruit to a top-secret department of the Orwell surveillance program. At a time when civil unrest threatens a major political crisis. Which is between the Nation and neighbouring country Parges.

Episode Three: Synthesis turns up the heat and unlocks the Influencer tool. Not only will you get the power to uncover facts. Now you will influence the way they are seen.

As a reminder, all of the content for Orwell: Ignorance is Strength and the official soundtrack releases now. So purchasing or downloading the game or the soundtrack from today will include all the available content.

So, with the season coming to its dramatic conclusion. The full game of Orwell: Ignorance is Strength the full game is now available on Linux, Mac and Windows. Priced on Steam, Humble Store and GOG for $9.99 USD/€9.99/£7.20. Purchasing the game includes all three episodes.