Possible the most British game on Kickstarter Her Majesty’s SPIFFING

BillyGoat Entertainment is currently seeking funds on #Kickstarter to create Her Majesty’s SPIFFING:a classic #adventure #game for PC, Mac and Linux “leaning heavily on national stereotypes for cheap laughs.” Hey, we didn’t say it! That’s straight from the animated mouth of Captain Frank Lee English, eloquent spokesperson for the game’s campaign and protagonist of Her Majesty’s SPIFFING.

The Queen (BSc, MEng, Defender of the Faith) has decided that she wants to expand the British Empire once again. However (given that this is the near future) the conventional methods of going about such a task (sailing up the Mediterranean, blowing up a few boats and subduing the indigenous population that survive, for example) are now somewhat frowned upon. 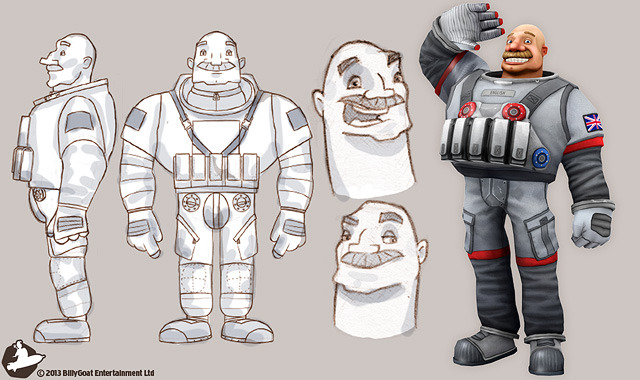 This “quintessentially British” adventure game, as described by developer Will Barr, takes place in a future where the Queen of England has decided to expand the British Empire once again; this time, to the stars. The game is being broken up into three episodes, with only the first episode being funded at the minimum Kickstarter goal of £30,000. Episodes two and three are tied to £60,000 and £100,000 stretch goals, respectively.

Her Majesty’s SPIFFING will play in a similar manner to the old school adventure games that we assume (certainly if you’ve continued to read through this much of our pitch) you know and love. You’ll have to manage an inventory, choose what items work best with one another to solve problems/ puzzles, engage in witty dialog to advance the game and fish for clues, as well as partaking in a few mini-games thrown in for good measure/ plot development.

Should the first episode be funded, BillyGoat plans to release by November 2014. The game is also seeking votes on Steam Greenlight as well. Bolly, this game looks British! Pip-pip, cheerio, fish and chips, guv’na!

For more details on further Episodes and details, check out Her Majesty’s SPIFFING on Kickstarter

Her Majesty’s SPIFFING launches on Steam with day-one support