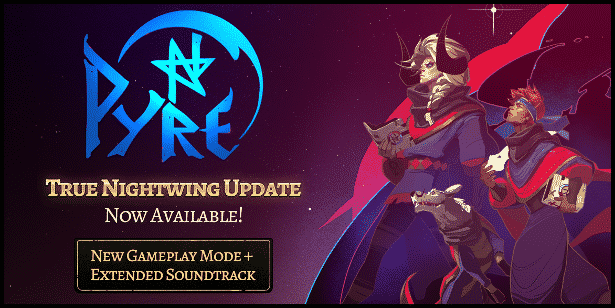 As our way of saying thanks to the players who’ve supported Pyre. Since Supergiant Games released the game in July, wenow have a free update available now on Steam. At the center of the latest update is a new Campaign mode. Since the developers are amping up the challenge and enhancing playthrough’s.

So for those who have not had a chance to play Pyre. Or been able to try Bastion or Transistor. Both games have discounts as well as pricing on the entire Supergiant library this weekend. Since all of the games are available for Linux, Ubuntu, Mac and Windows, it’s a nice bonus.

About the ‘True Nightwing’ Update

So the latest update is a new Campaign mode. Since this is available after you reach the end of the Campaign. Therefore if you have already finished the Campaign, it should be unlocked automatically.

Reminiscent of an ‘Ironman’ mode in other games, this new way to play really amps up the challenge, and emphasizes many of the unique aspects of Pyre’s campaign — notably in how the story has no ‘Game-Over’ state, and keeps moving forward, taking your choices and outcomes into account.

Some of the specific changes in this mode:

In addition to the new mode, there is also more than two hours of extra music. Available in the Pyre Original Soundtrack, in the form of two bonus albums…

So if you own the soundtrack, you’ll automatically receive these bonus albums as a free update.

So make sure to grab the discount pricing on the entire Supergiant library this weekend. All of the games are available for Linux, Ubuntu, Mac and Windows.

Pyre party-based RPG due to release next week