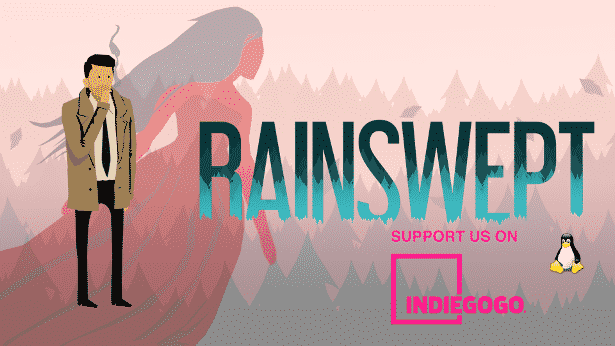 Rainswept cinematic murder mystery is now available on Indiegogo campaign for Linux, mac and Windows. Which also 155 funded toward the pledge goal of only $4,000 USD. Releasing in January 2019.

The game follows the cold midnight shootings of Christopher Green and Diane Miller. The residents of Pineview with a troubled reputation.

While taking on the roll of Detective Michael Anderson. Players are part of an investigate of the apparent murder-suicide. Taking places in a cinematic adventure game featuring…

While also receiving the help of empathetic Officer Blunt. Rainswept aims to settle its audience into the daily rhythm of a small-town murder investigation. Also having them explore the streets of Pineview. Interrogating suspects and solving puzzles in point n’ click fashion.

All while Detective Anderson’s own unresolved trauma threatens to jeopardize the case. Players will also experience Chris’ emotional story with Diane through flashback sequences, joining them in pivotal moments of their lives.

Rainswept was first released as a 30-minute playable demo (Mac and Windows) in the month of January 2018, garnering well over 50,000 views and 10,000 play-throughs across Gamejolt and Itch.io in the months since. While the game engine is Unity 3D, the demo can be run via Wine.

An Indiegogo campaign launched by creator Frostwood Interactive now seeks to complete development of the game. Which stands finished in terms of its core game play and story loop.

“Rainswept can be played from start to end, but I now need to plug-in the holes by adding elements to make the world feel more alive, polishing various aspects of writing, animations, graphics, UI, and testing for quality assurance,” explains Armaan Sandhu of Frostwood.

“All acquired funds will not only ensure maximum quality of the final product but will also help with keeping its release schedule.”

Rainswept is being developed for an estimated January 2019 on Linux, Mac and Windows. While launching on Steam, Gamejolt and Itch.io. Learn more of its creative process by visiting the game on Indiegogo.