See that? That’s the excellent looking retro action platform from Levels or Lives, Super Fun Games, and Crescent Moon Games. It’s called Crystal Catacombs, and was successfully #funded on #Kickstarter in July of 2012.

To continue the process, the developers want to get Crystal Catacombs on Steam, which is perhaps the most well-known gaming distribution platform for Linux, Windows, and Mac games. The process there is known as Project Greenlight, and Steam members all vote on the games they’d like to see on Steam. 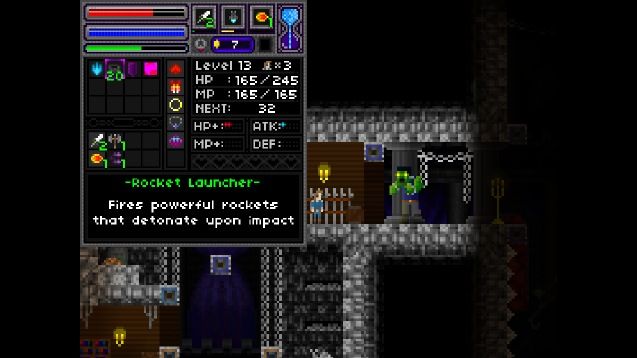 The game itself is what’s commonly called a Metroidvania style game, meaning that it’s inspired by the popular Metroid and Castlevania games of the past. Games like this feature challenging levels full of obstacles, traps, baddies and opportunities for exploration. Crystal Catacombs will generate these levels and enemies on the fly, procedurally, so that no two gameplay sessions will be the same.

You’ll work your way through various levels with retro-sounding names like “Lost Jungle,” “Deep Darkness,” “Pitt” and “Ice Fortress,” leveling your intrepid catacomb explorer along the way with experience and skill points. Thrill to the chip-tune soundtrack and the handcrafted pixel art and animations while you battle the baddies and escape the dungeons.

Crystal Catacombs has been in development for almost four years, and — according to the publisher — is about 95 percent finished. The plan is to officially release once Crystal Catacombs is given the go ahead on Steam, hopefully this Spring. The team hopes to release on mobile, as well.

You can pre-order Crystal Catacombs at Levels or Lives‘ website, but if you dig the video above and want to support quality Linux games, head on over to Steam and check out Crystal Catacombs on Steam, and give it a Yes vote.