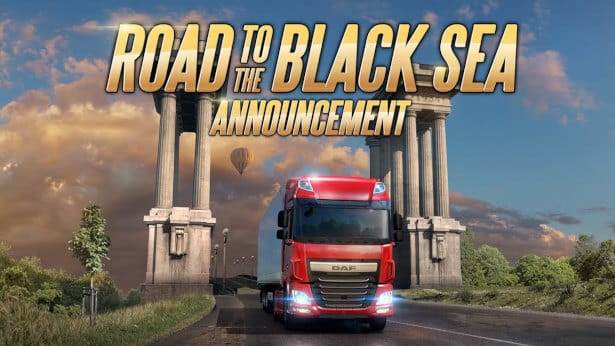 Road to the Black Sea expansion announcement for Euro Truck Simulator 2 in Linux, Mac and Windows PC games. Thanks to the continued efforts of SCS Software. Who are also eager to announce the new map expansion. All headed to Steam this year.


Euro Truck Simulator 2 drivers will be able to expand their company. Also delivering to the countries of Romania. Known for the forested region of Transylvania. While being surrounded by Carpathian Mountain range in Road to the Black Sea.
Bulgaria with its diverse terrain and Black Sea coastline. Since the Trakya region of Turkey is the gateway to the Europe’s largest city, Instanbul.

From large cities to small humble villages in the countrysides. Truckers will also be able to drive near scenic coastlines. Such as the Road to the Black Sea, of course.

These regions also offer a large variety of industries. So it easier for players to deliver to and from in Road to the Black Sea. Including farms, logging companies and the mining industry.

Coming to Euro Truck Simulator 2 later this year. Drivers will be able to expand their company. Also delivering to the countries of Romania. Since they are known for the forested region of Transylvania. Plus the surrounding Carpathian Mountain range. Bulgaria with its diverse terrain and Black Sea coastline. The Trakya region of Turkey which is the gateway to Istanbul.

Euro Truck Simulator 2 will have you traveling across Europe. Once again in Road to the Black Sea. You are the king of the road. A trucker who delivers important cargo across impressive distances.
So your endurance, skill and speed will all be pushed to the limits. If you’ve got what it takes to be part of an elite trucking force. Get behind the wheel and prove it.

So if everything goes according to the plan. SCS Software expects to release this latest Euro Truck Simulator 2 map expansion. Coming towards the end of this year. There is also no solid release date yet. Which means you can Wishlist the expansion on Steam. And the games new expansion is coming to Linux, Mac and Windows PC.