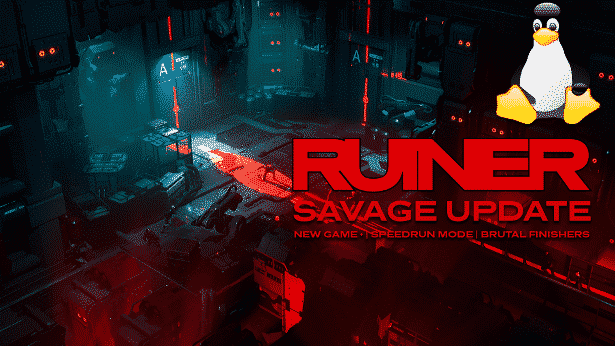 Developer Reikon Games have released a free update. Hence the critically-acclaimed shooter RUINER. The also includes the brutal New Game+ and Speedrun modes. Alongside new weapons, outfits and all-new finishing moves.
Also, RUINER is 33% off on Steam from November 20 – 22, 2017. All to celebrate these new additions.

So that being said, we also reached out via Twitter. Following some positive news regarding Linux:

So clearly this is not a formal release date. Also, we are eager, like everyone else, hoping to play that native Linux build. And since we have played the games Windows release, wow, it’s good. So that Steam discount comes highly recommended. 🙂

Back to the details. RUINER’s new Savage Update includes several heart-pounding new additions. So this means new gameplay tweaks for a more approachable RUINER for new citizens of Rengkok. The New Game+ mode ratchets up the intensity. So this will challenge even the best players. While the new Speedrun mode adds in online leaderboards. Also removing everything but the action – pure combat as fast as possible. And do note, the gameplay is fast-paced. Even with a controller you’ll have to make some split second decisions.

The new update also includes ten new weapons. So players can battle alongside the new RUINER Kills. This adds violent crescendos to complete your kills with stylish gore. New RUINER outfits complete the fresh look. Allowing players to change their player model as well. The celebrated soundtrack also gets two additional tracks. Thes are by Sidewalks and Skeletons.

This is all positive news, but in preparation for the coming release on Linux. It’s time to grab that Steam discount.

If you or someone you love is looking to become an unstoppable psychopath. Doing so with a sweet video helmet strapped to their face. Please follow @RuinerGame on Twitter.

RUINER gets an official native release on Steam