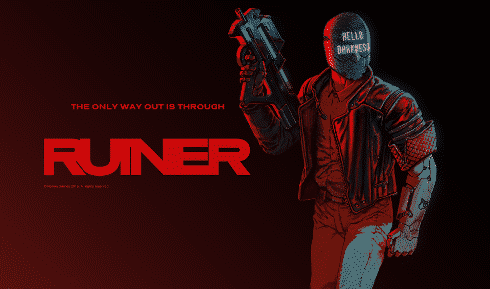 RUINER a #topdown shooter take place in a city created in the spirit of cult #cyberpunk anime and #game classics. RUINER is quick and brutal but sophisticated gameplay, original world with mature storyline and unique visual style. The project was born out of passion for great games but also for pushing the boundaries.
RUINER‘s developer Reikon Games take on cyberpunk motifs but rather than making a pure cyberpunk game. The main inspiration is the world we live in. Because the future’s already here.

The game looks amazing, as you would expect for an Unreal Engine 4 title. A top-down shooter that takes you into a cyberpunk environment that looks like a cross between Shadownrun Returns and Hotline Miami.

Storyline, The Man has nabbed the main characters brother so players have to murder loads of people and megacorp robots.

Reikon Games are a small Polish studio founded in December 2014 by four seasoned game creators: Jakub Styliński, Maciej Mach, Magdalena Tomkowicz, Marek Roefler and Benedykt Szneider who joined as Creative Director for the game. Having already worked on titles such as The Witcher 1 through 3, Dead Island or Dying Light. The music for the game is provided by Paprika composer Susumu Hirasawa.

The Reikon Games team will be available at the Devolver Digital booth with awards for skilled player who reach the end of the challenging demo. For those that cannot make it to PAX East, tune into twitch.tv/twitch for the replay of RUINER from Reikon Games.

After more than a year of quietly making RUINER, Reikon Games have joined forces with Devolver Digital to bring RUINER to Linux, Mac, and Windows PC.

RUINER gets an official native release on Steam