Tanais Games is #announcing its first #game, Saint Kotar for Linux, Mac, and Windows PC. Currently in the early stage of #development, coming out in 2017.

“Saint Kotar is a 2D point and click adventure game coming out in 2017 for Windows, Mac, and Linux.” – yes, Saint Kotar is a true 2D classic point and click adventure game! “The game merges psychological horror narrative and classically inspired point & click adventure mechanics with switchable characters.” – yes, this means you will be able to switch between the protagonists during the game. “Digitally hand-painted with a distinctive 2D art style that fits the game’s mood, fully voiced and featuring an original eerie soundtrack, Saint Kotar draws inspiration from PC classics like Broken Sword and Monkey Island, along with the works from horror fiction writers such as H.P. Lovecraft and Edgar Allan Poe.” – as a gamer, I’m in love and obsessed with point and click adventure games and to say it more generally with all narrative games. I love to read, figure out puzzles and explore worlds and characters. I’m a gamer since the end of the 80’s, I can assure you – this is eternal love. As a reader and writer, I’m amazed with Lovecraft and Poe. Mysteries and a profound sense of dread building up while progressing trough the story form just a small part of the reason why works from these two writers are still so highly worshiped. So, mixing the part of myself as a gamer with the part as a reader and writer, and you get as a result a beloved child – Saint Kotar. 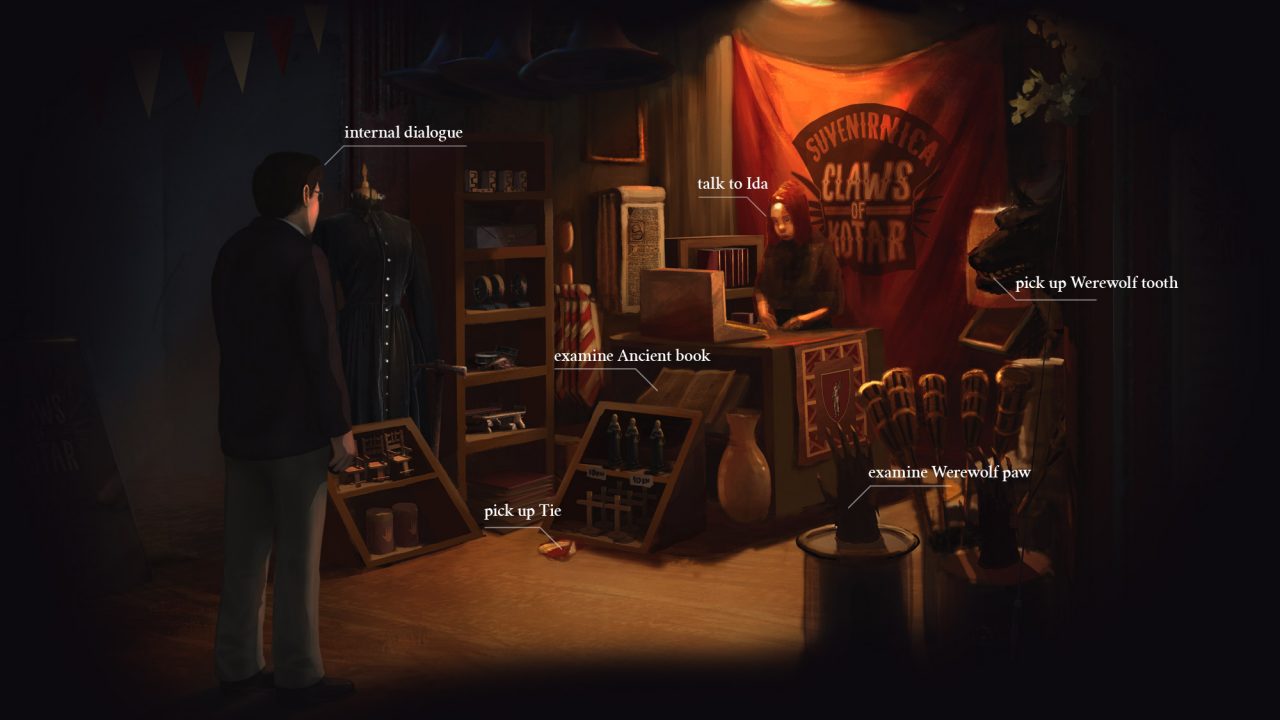 Saint Kotar, a lonely ancient place, isolated and hidden behind a vicious mountain peak. It dwells in the mountainous region of Croatia, forgotten and neglected by the time. At first, it deceives like a typical rural town with scenic views of the charming area, sparsely scattered houses, and the church bells tolling in the distance of the quiet valley. Only on a closer glance once a proud mining town shows its true nature, with many houses deserted and falling to ruin, dark foreboding forests and a ghastly scent of decay filling the air. Strange stories howling through the foggy streets haunt its furtive inhabitants, repeatedly coercing them to pray when the night is lit by a full moon.

Invited to attend an exhibition of rare medieval art, the protagonists travel to Saint Kotar at the end of October 2006. The welcoming is cold and atrocious, as they find themselves dragged abruptly in a macabre series of murders, allegedly related to Satanic worship and witchcraft. These dreadful acts compel the protagonists to follow the shadow of something deeply hidden behind the town’s dark past.

Surrounded by a tenebrous aura of mystery, madness and fear, the protagonists to survive have to struggle not only against the unknown, but against themselves too, ultimately uncovering the vile truth of their own past.