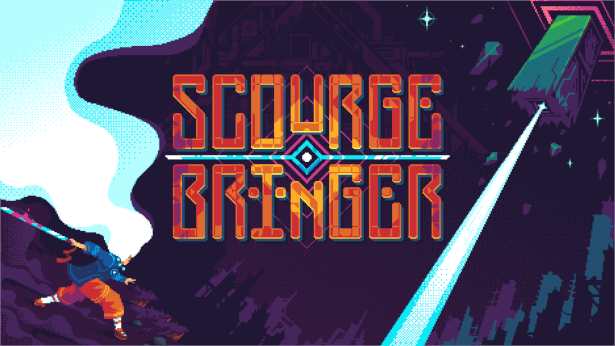 ScourgeBringer is an upcoming free moving roguelite platformer. So we have a first look trailer to unveil the game.
Which aims to channel the mystery and rawness of an early Metroidvania. Coming with fluid control, aerial combat and pixel graphics. Plus a punchy soundtrack.

So the ScourgeBringer story follows hero Kyhra. Sent away to uncover the secrets of an Eldritch. Since it is threatening to destroy her world.
Armed with her trusty combat drone. She must shoot and slash her way through the dungeon. While working through infinite depths and facing gigantic bosses. Ancient machines, strange ghosts and also, untold secrets. All left from previous explorers.

There is no backtracking within the games structure. Since this follows a procedural combination of pre-built challenge rooms. Also not unlike the Binding of Isaac.

“We have been working on ScourgeBringer openly for a few months now. And have been collecting community feedback early on. Working to shape the game. We share all of our plans. And even our budgets with players”, says Thomas Altenburger from Flying Oak Games.

“So now we can finally show the first trailer of the game. Which should also give a glimpse of the genre cocktail in the making. Our goal is to take the best elements of our favourite games. While creating something completely new.”

ScourgeBringer is currently in open development. With an in game feedback system for players. Also a regular look behind the curtain courtesy of regular development updates. Thanks to Flying Oak Games, follow on Twitter.

ScourgeBringer is the second game by Dear Villagers. The games also coming to Linux, Mac and Windows. Price and release date to TBD.
Along with the reveal of sci-fi platformer Recompile. As part of the new strategy launched with last weeks rebranding.