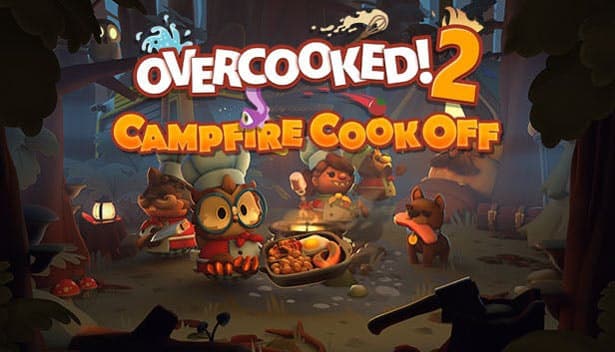 Season Pass launches for Overcooked 2 in Linux, Mac and Windows games. Thanks to developer Ghost Town Games and Team17. Which also means the Campfire Cook Off is playable now. Available on Steam, GOG and Humble Store.


While the Overcooked 2 Season Pass releases. That also means the Campfire Cook Off is available. This DLC offers a feast of new content. Including chefs, recipes, kitchens and mechanics. But the Season Pass gives players access to all content released in 2019. Which is the better value. So you can spend $19.99 USD for 3 DLC’s. Instead of $5.99 USD for one DLC. Which leads me to believe that the coming DLC might be more pricey.

In Campfire Cook Off, which is part of the Season Pass. The DLC takes players to the Trail Mix Trail. Which also includes the Onion King. As well as Kevin the Dog and four new chefs.
Tackle two new recipes under the stars. While keeping the campfires stoked with firewood! What camping trip is complete without a trusty back pack? Players will also need to adjust to the new mechanic. Which takes ingredients on the move!

Campfire Cook Off is available priced at $5.99 USD / £4.79 / €4.99. Available on Steam and GOG. While the Humble Store listing seems to have a pricing conflict.

The Overcooked! 2 season pass will satisfy the hungriest of customers. Giving players a saving on three extra portions of content. This includes Campfire Cook Off and two further DLC packs. Since will each offer even more meals. Also more mechanics and mayhem.
Since the Season Pass is now live. It’s available on Steam, GOG and Humble Store. Priced at $19.99 USD / £14.99 / €16.99. Which also launches in Linux, Mac and Windows PC games.