Secrets of Raetikon Review for Linux, PC, and Mac on Early Access 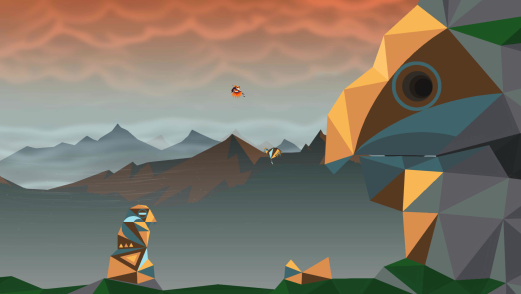 Secrets of Raetikon is a #game where you play as a bird that falls from the sky and begins a journey toward unlocking the secrets of a world populated by arcane statues, mystical runes and birds. Lots of birds. The game’s aesthetics are a jutting combination of angular, vertex-inspired #2D art and the captured calls of birds and wind. This melding of the aesthetics of the natural world and the visual signifiers of videogames is visual shorthand for the entire experience of Raetikon: a comforting synthesis of familiar gameplay and exciting new developments in the indie explosion we’re currently living in.

This is not merely visual and auditory, although I want to make it clear that the choice to make the player character a brightly-colored bird and not a scruffy white man at the end of his rope is an important one at the opening of 2014. Raetikon takes the time-worn Metroid style of game and opens it up to a new mode of interaction. The Metroid series is marked by a fairly specific set of qualities that position the player as a character with a limited set of abilities. As the game goes on, the player gathers weapons and abilities that empower her, eventually being able to break through previously-closed doors to complete the game.

Secrets of Raetikon takes that formula and reduces it to its bare qualities. What if the discovering of weapons and powers ups was changed into the discovery of knowledge, of language itself, in the form of runes that you translate over the course of the game? What if the earthbound Samuses of the genre’s forerunners were not jumping over pits and slaying enemies, but instead flying through the sky and attempting to avoid their enemies? These questions are the formative ones that make up the gameplay experience of Raetikon, and the answers are fulfilling. The flight of the protagonist bird is fueled by individual button presses, and each tap of the A button on my controller drives my red companion further and further into the sky, around rock formations, and away from enemies. There are puzzles that block my path, but the way to get by them is not the gradual learning of boss mechanics. Instead, you collect small bits of light and place them in sockets. You use your bird grip to pick up pieces of statues scattered throughout levels, bring them together, and assemble them into altars to strange natural gods shaped like animals.

I’m describing all of these mechanics in a scattershot way because I’m attempting to communicate how fresh Raetikon feels while still remaining firmly grounded in a very particular family of videogames. The play experience delivers in a very mechanically real way, and the act of flying around has a very particular “bird feel” that diverges enough from standard character controls in games to stand out in my mind for a long time. These controls feel good when flying around and carrying around pieces of statues, and they feel terrifying the first time that you are trapped in the claws of a falcon or an ocelot. Being trapped beneath another animal, tapping the A button furiously in an attempt to fly away and receiving nothing for your effort, is a despair engine.

If any of these things sound intriguing to you, Raetikon is currently in development and is currently being sold as an early access title for 25% off on Steam at $7.49 USD. From my time in the game, it seems that there are some missing assets, not-quite-clear story elements and glitchy behaviors, all of which seem like they could be ironed out very easily. There is certainly a playable, compelling game here already, and it is certainly worth time and money in its current state.

Secrets of Raetikon was developed and published by Broken Rules. It is currently in beta tasting through the PC, Mac and Linux through the Humble Store and Steam’s Early Access program. We will assign a score after reviewing the finished product.

Secrets of Raetikon coming to Linux, Mac, and Windows PC on April 17