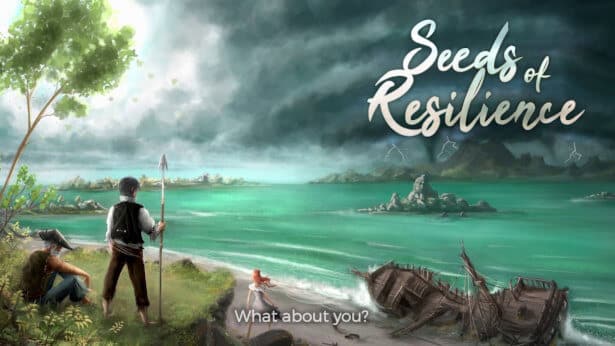 Seeds of Resilience survival management launches in Linux, Mac and Windows PC games. Thanks to the development efforts of Subtle Games. The games full launch release on Steam and Itch.

Seeds of Resilience will have you manage a team of survivors. Who are shipwrecked on a desert island.
Since the player will have to create a village. Starting from the ground up and prepare for the upcoming natural disasters.
Therefore you must choose materials according to their properties. Then create buildings inspired by authentic medieval construction techniques.

After almost 1 year of Early Access and 7 years of development. Seeds of Resilience releases now. The games a 2D turn based survival management simulator release. Where you have to create a new village from scratch.

A Story Made In Brittany

The Seeds of Resilience has a special story. Since it was born in a time where the environment was still a forgotten issue, 7 years ago. The kind of time where growth is the only thing people were interested in.

The team is made of Antonin Deudon and Alexandre. During the development of the game. They were also involved in environmental activities. While making survivalist trips together. Learning to live in harmony with nature.

The graphic artist, Alexandre, has a main business. Making durable, wooden insulating material for the construction industry. He also invented and built a whole machine by himself. Just to make those materials. Influencing the sim design of Seeds of Resilience.

Antonin, on his side, has started to create an eco village. It’s a village of about 20 people. Building on having a resilient, plastic-free, auto-sufficient way of living. Since his family of 4 will be moving here in the upcoming months. Which even has an internet connection.

So in Seeds of Resilience villagers build life like structures. Hopefully those that can, or cannot, stand the test of time. Those buildings take inspiration from real life medieval techniques.

Another example inspired by nature. So if you’re overfishing around the island. This will also impact the village. No fishes, no reproduction!
So the player has to be aware of the environment. Since could end up starving. Same thing for agriculture, it has to be made in a reasonable way. If you always gather fruit. But never leave time for things to grow, it won’t be good in the long term.

Seeds of Resilience management launches with a 20% discount on Steam. and a 1.0 Release. But there is a 34% discount on Itch, priced at $9.23 USD. Which also includes a Steam key. Available support for Linux, Mac and Windows PC.