Indie game company Enigami has successfully funded Shiness, a #gaming experience it describe as halfway between a dynamic fighting manga and a fantasy RPG.

Enigami based its battle system off of the types of fights seen in series such as DragonBall Z and Naruto, while blending it with traditional #RPG elements. To move from the turn-based battle system of most RPGs, the team placed equal value on fighting and exploration. This means that there is little transition between exploring and fighting, in order to maintain “a fast rhythm and constant in-game action.”

Shiness is a Role Playing Game which will let you dive into a new adventure across Sky Islands. In a world where every land strives for power, two Wakis named Chado and Poky, travelling aboard a flying boat, accidentally land on a very dangerous island. Prepare yourself for an epic journey into a huge universe that will stay with you for a long time! With its unpredictable storylines and frenetic gameplay, Shiness is waiting for you to play the story imagined 20 years ago by our Creative Director and finally brought to life.

The fighting mixes magic with close-combat elements found in fighting games like punching, kicking, a counter system, dodges, and combos. 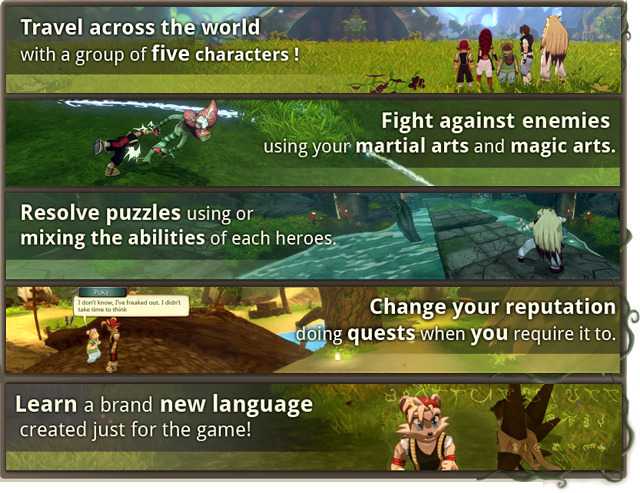 The game takes place on a fictional world called Mahera where several different species of creature co-existed thanks to an energy called “Shi.” Once the spiritual energy force in the world began to dwindle, it lead to a global war. This created a time of discord among the species of the world that separated them spiritually and physically, as each species found itself bound to a floating island.

Shiness is planned for release on PC, Mac, and Linux, but the team hopes to bring it to PS4 and Xbox One should the project reach its $140,000 USD stretch goal.