Skelattack, the games development is in-house 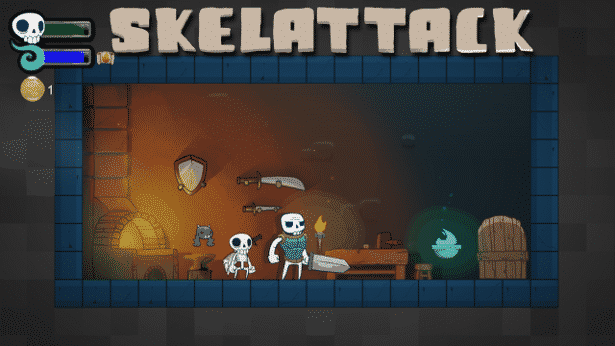 Skelattack the 2D action platformer games coming to Linux, Mac and Windows. At PAX South last weekend the title was met with an overwhelmingly positive response. This is from both attendees and fellow developers. So now, due to this amazing outpouring of support. Ukuza, the title’s publisher, has decided to join forces directly with David Stanley on development. Since the games’ Steam release was supposed to be January 19th. As stated in the video below.

As part of their agreement with developers. Ukuza positions itself as a fundamental extension of a developer’s team. Since they perform quality assurance and playtesting. Providing creative input including story and setting suggestions. Including invaluable resources for marketing management and business development. With years of shared experience in this realm between them. Ukuza and David Stanley feel extremely confident in advancing their partnership. Since they both work to bring development of Skelattack in-house.

Shane DeLumeau, CEO: “Over the past seven months, the Ukuza team has worked closely with Dave to help craft the creative direction of the game, mold the story, and drive innovation in gameplay mechanics. We’ve formed an amazing partnership which has helped elevate Skelattack. We are extremely happy to have Dave join the Ukuza team as a partner.”

Doug Borghese, Director of Social Marketing and Brand Communications: “We wanted to make sure David had precisely the support he needed in the development of Skelattack from the beginning. We’ve decided to take that mission a step further by adding our development experience to the title. We will now operate in direct partnership with David by developing the game in-house. This is essentially how we’ve operated since David signed with us, but we’ve decided to make it official to ensure all avenues of success open themselves for the launch of Skelattack. Not to mention we just love working with the guy.”

David Stanley, Developer, Studio Technical Director for Ukuza: “I feel fantastic about the opportunity. Ukuza have proven themselves to be a true asset, and I feel very secure continuing to develop Skelattack and future games with them.”

What about the games release?

Since GameMaker: Studio is the engine of choice. But now that development moves in-house, things may change.

So LGC reached out to Doug Borghese from Ukuza, “We are looking at releasing by March after the awesome feedback from PAX. But we also had a few business opportunities open up. Which may allow us to go even deeper into the game. So we may move the date back even further to facilitate delivering the best version of this game possible. We’re concentrated on pulling out all the stops for Skelattack. Because we want everyone to have a mind-blowing experience once it’s available. And yes, we are squared away for release on Steam.”

Recently the team was targeting March 2018 but that could be a ball park time frame.

So due note, Skelattack is expected to release on Linux, Mac and Windows via Steam. More details will be available soon, so stay tuned.