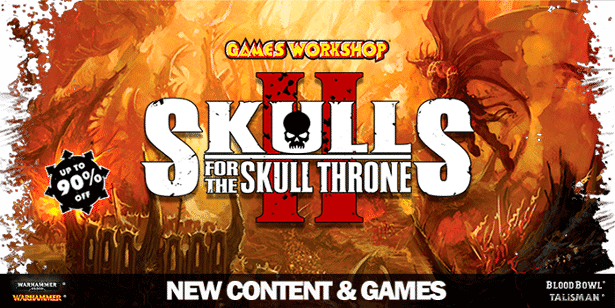 The Games Workshop’s Skulls for the Skull Throne sales is now on Linux, Mac and Windows via Steam. Also a weekend-long event. Since games from the Warhammer world and the Warhammer 40,000 universe have some amazing deals. Of course these are all time-limited discount offers on Steam.

On this special occasion, Man O’ War: Corsair, which portrays epic real-time space battles, and Warhammer 40,000: Dawn of War III. Both have solid discounts on Steam. Also you can pre-order Warhammer 40,000: Gladius – Relics of War which also includes a 10% discount.

Skulls for the Skull Throne Sale and discounts this weekend:

Space Hulk: Deathwing – Enhanced Edition: Embrace (with style) the violence and wrath of the renowned Angels of Redemption. And also Disciples of Caliban Space Marine Chapters with a 20% discount. Experience the horrors of Khorne and equip new armour skins, banners, and emblems. All taking inspiration from two iconic loyalist Chapters with the free Skulls for the Skull Throne DLC for Space Hulk: Deathwing – Enhanced Edition.

Chainsaw Warrior is a classic nail-biting game for one strong-nerved player. While in the year 2032 and spatial warping has opened a hole into another dimension. Also in the midst of the old municipal buildings at the heart of Manhattan. Bizarre and dangerous creatures are flooding into our dimension.
So now players will have to fend off the invaders under the controlling intelligence, called ‘Darkness’. Which has an okay rating on Steam.

Man O’ War: Corsair, Warhammer 40,000: Dawn of War II – Grand Master Collection<, and Space Hulk: Deathwing – Enhanced Edition. As well as their DLC’s are on sale, are available with amazing discounts up to 75% off over the next four days.