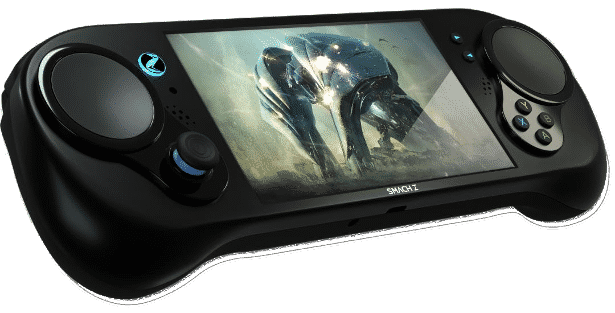 SMACH Z Production begins for the handheld Linux console in Q1 2019. According to a recent announcement. The long awaited hardware will be launching into the market soon.


The Portable Console for PC Games.

The SMACH Z team confirms that providers are already working on components production and delivery. Mass production of SMACH Z, the device that promises to revolutionize the world of PC gaming. Will be coming in Q1 of 2019.

So after two years of development, the device is ready to go to market. Coming with a 6-inch high-definition touch screen and hardware based on AMD Ryzen Embedded. Also an AMD Radeon Vega 8 Graphics.

This is great news for the whole community of players around the world who are looking forward to playing AAA PC games anywhere, at the same speed and with all the advantages of a desktop PC.

So first look at this seems to point at Windows more than Linux. And playing GTA V on the console seems viable, but for Linux this would use Steam Play. Which does not appear to be the case. As you watch the video through to the end, you notice a couple of Windows based OS screenshots. That’s it.

So this should be intresting. Since the first to receive the SMACH Z will be the backers. Those who support the development of SMACH Z through crowdfunding on Kickstarter and Indiegogo.

The backers´ contribution to the decisions of the company has been key in the last 2 years. This will be even more so at launch. The company expects to receive more valuable feedback from them.

About SMACH Z
So unlike traditional consoles, it allows you to access all PC games (Steam, Origin, GOG, etc.). It can run any PC game, indie as well as AAA. But what happened to Linux as the OS?
Thanks to its AMD Radeon Vega 8 Graphics and AMD Ryzen Embedded. The SMACH Z has power and graphic quality never before achieved by a portable device. The battery life is between 2 and 7 hours of playtime and recharges in only 45 minutes.

The SMACH Z is a PC in form of a console, so it allows you to install Windows. Work in Excel, it has a front camera to make video calls, you can also surf the Internet, play music or watch movies. It can be connected to a keyboard, a screen or mouse and be used just like a laptop. It has a 6-inch high-definition touch screen so it is also possible to watch movies comfortably or connect to your Netflix account or any streaming platform.

So the user has a choice of Linux or Windows. Even looking back on the Kickstarter page, the campaign highlights a Windows and Linux link for supported games. Do they even know about Steam Play and Proton support? Would it work via Linux on the console?

Also, be sure to check out the shop, this unit is not a cheap console. So it should be interesting to see how the console is accepted into the gaming market. So far, I cringe.