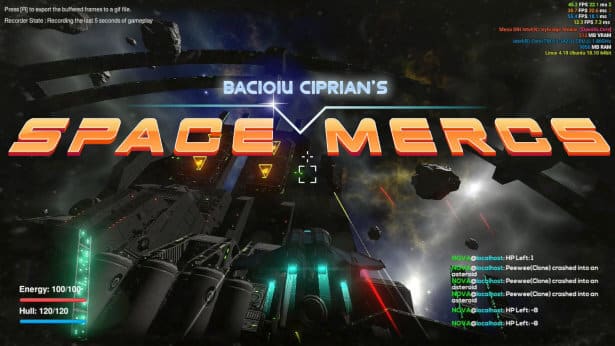 Space Mercs the extreme action space combat release date in Linux and Windows PC games. Thanks to the creative efforts of Bearded Giant Games. Which is coming to Steam, Itch.io and the Bearded Giant Game store.


Space Mercs is due to release on July 31st. Bearded Giant Games is a Linux 1st developer. Who also released the action trailer for the upcoming extreme action space combat game.
So in Space Mercs the player is thrown into cockpit. While fighting a shooter battle against hundreds of space ships. Doing so in a large scale galactic environment. Featuring hundreds of bullets on screen at any given time. The player must also navigate the conflict. Completing the objectives assigned over a course of 30 missions.

The game is also design can run even on low spec hardware. Including integrated GPU’s. While boasting a performance of at least 45 FPS. Low spec gaming has never looked better. Featuring a 3rd and 1st person viewpoint, in Space Mercs, the pilot will always feel like a galactic badass!

Space Mercs releases four different game modes. Two available from the start. And two that can be unlocked by progressing through the story:

Space Mercs release date is on July 31st 2019 for Linux and Windows. Launching on both Steam, Itch.io and the Bearded Giant Game store.