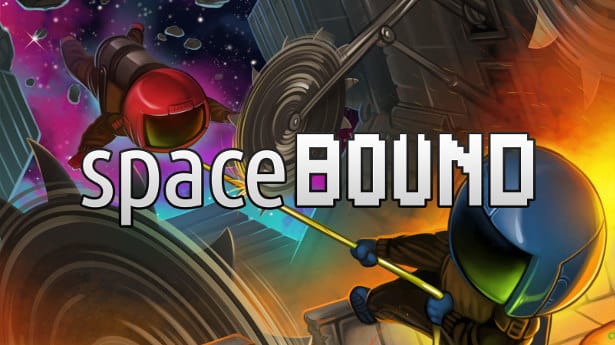 Gravity Whale Games releases its debut title spaceBOUND via Steam’s Early Access. Since the games available for Linux, Mac and Windows. While already having been Greenlight. Along with a successful supplementary fundraising campaign on Kickstarter.

spaceBOUND is a solo or co-op puzzle-platformer. Since players control two astronauts who must overcome deadly obstacles. All while solving motion/physics-based puzzles in a zero-gravity environment. The catch? The astronauts have crash landed on an asteroid. Yet have to share their oxygen via a tether. So if one astronaut dies or the tether breaks, they both die.

Therefore gameplay combines a brutal level of difficulty. With retro 16-bit artwork and an intense and atmospheric soundtrack.
So spaceBOUND brings players back to classic puzzle / platform games. While asking them to cooperate in ways few other games do.

Since spaceBOUND releases as a unique game to be in Steam Early Access. The build is fully-playable, missing only online co-op (included with full release). While the game’s full version is expected to launch in late August. So yes, Gravity Whale Games decided on a short Early Access period. This way they reward supporters and get a more broadminded player feedback.

spaceBOUND is available now with a 24% discount until August 10th. Since it releases on Linux, Mac and Windows via Steam Early Access. Learn more about spaceBOUND and get a full list of features.