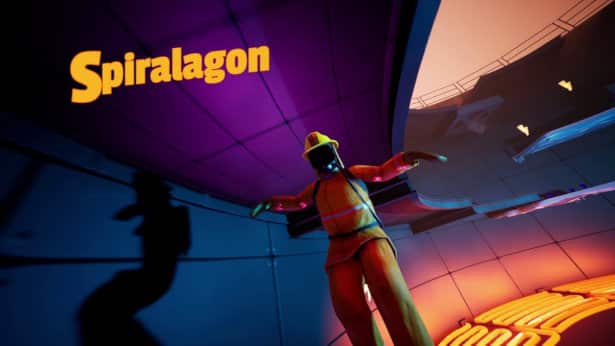 Spiralagon, the “purest game I’ve ever made” is also the first game from Terminal Button (the solo developer). So now comes its first update; the Icy Incursion zone. Available from Jan 4th, Icy Incursion is wall to wall ice, and also floor to ceiling. It even includes a hint of global warming at the end.

Players can forget any feeling of mastery as they start off down the ice platforms. Get up to speed and try to be ready for the next jump or direction change as the characters arms flail about in panic.

“Just letting you know that I’ve tried to get Spiralagon running for Linux, and it seems there is a problem with a piece of middleware that ought to support it, but doesn’t seem to.
I’ve submitted a bug report, but I’m yet to hear back.”

As suggestive as this seems. Terminal Button first outlined that they are not considering Linux support. But on the contrary testing seems to produce some issues. And the developer is straight forward and honest about it. Unreal Engine 4 is being used for the games development. But testing seems to have come to a halt for Linux, for now.

Spiralagon is a singleplayer 3D Platformer where players chase high scores and fast times. From easy fun to gruelling self-administered attempts at perfection, Spiralagon is a game anyone can enjoy and hate. It’s hard until players understand it. Then it’s easy until players get good at it.

Gameplay is seems silly but much harder to master. Choose any character and play any level in any order, or play the full campaign. For players who loath pressure and objectives, No Pressure Mode disables health and time limits for a self-defined experience.

Spiralagon’s Icy Incursion zone is available now on itch.io. Currently under the donation model (recommended $9.00 USD, min $3.00). This is a standalone DRM-Free on Windows PC. The games also in testing for Linux.