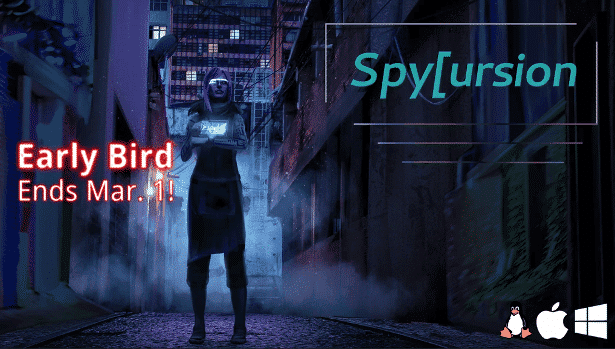 Spycursion hacking MMO is now in Kickstarter games for Linux, Mac and Windows. All thanks to developer (defun games ()). Since the crowdfunding campaign has a pledge goal of $100,000 USD. The game unique and provides hope for MMO fans.


Spycursion is a sandbox “edutainment” MMO. Which also centers around hacking and espionage. Taking place in a near future world damaged by cyber warfare.
In the world of Spycursion, you will use strategic ploy. While using technology to craft and carve your own path. Since this universe is both strange and familiar.

Spycursion is designed to be fun and challenging. But also educational. The Slang programming language will be easy to learn. And also use (among other goals) or mimic real world programming.
So complete newbies can use Spycursion to learn. Both about programming and cyber security. While tech savvy engineers can use the game as a sandbox. Which will also reward them for their skills.

While in Spycursion, there will always be other players around. So you can interact, befriend and scheme. Then hack, betray use social engineering. Or completely ignore.
There’s also no one way to play Spycursion. Nor is there any one way in which to advance your character.
However, the game will have a flexible skill based system. So this allows you to mix and match skills. Those that make the most sense in how you wish to play. Plus you will never be bound to any one role.

In the past, some indie MMO’s have failed. This is due to an over reliance on interactivity. Or simply not enough players online at a given time. Which means there’s not much to do. Spycursion will avoid this problem. By making sure to include plenty of content for you to explore. Which you can do on your own. Regardless of who is (or isn’t) online.

So between the world’s mysterious lore. Automatic creation of missions involving NPC’s. There will always be fun. Plus, just because your friends are offline, doesn’t mean their servers are…

Spycursion will be a continuously evolving MMORPG. As long as we have enough subscribers. There will always be something new to do in the game. So the game quality will keep improving. And since a lot of the gameplay will be player driven. The players themselves will create unforeseen interactions. Which also translates into a richer dynamic experience.

Spycursion is seeking a Kickstarter goal of $100,000 USD. The games also coming to Linux, Mac and Windows. Releasing in October 2020.