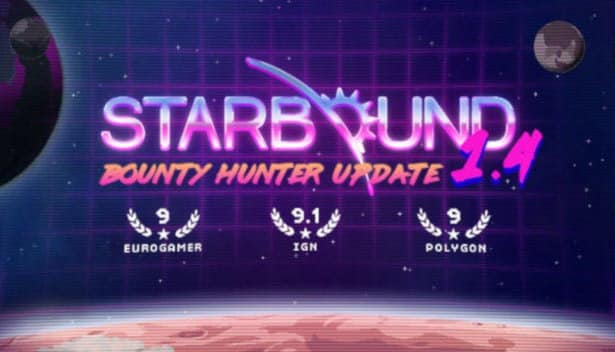 In this Starbound update players take on the role of an intergalactic bounty hunter. So you can take on new quests to track down wanted criminal gangs. While you follow clues to discover their hideouts. Rise up through the Peacekeeper ranks. So you can ultimately restore law and order in the universe.
While cornered some criminals may even offer treasure. Even rewards as a bribe. So it’s up to you to decide. How strictly they’ll uphold the law.

There are also over 50 new ‘rare colored’ variant monsters. These can all be captured. and a variety of other new content including furniture, armor, tenants and more!

There’s a detailed changelog available on the game’s official wiki.

Starbound is an extraterrestrial sandbox adventure game. You’ve fled your home. So now you find yourself lost in space with a damaged ship. Therefore your only option is to beam down to the planet below. While you gather the lands resources you need. So you can repair your ship. and set off to explore the vast, infinite universe.