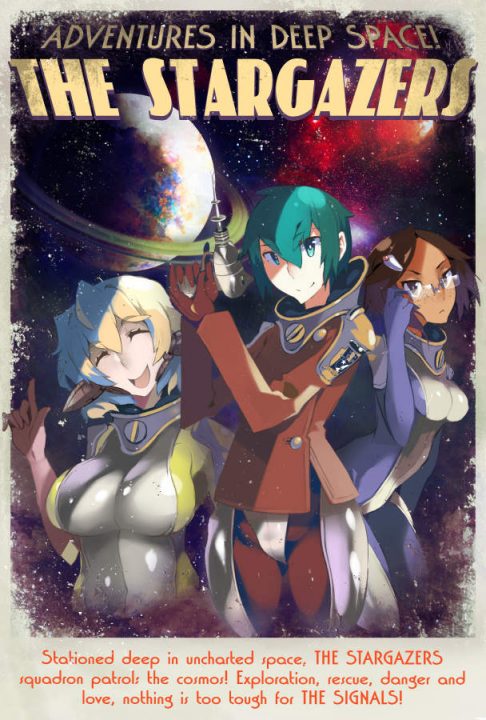 The Stargazers squadron! Three pilots of the Allied Defense Force Signals, first to arrive in any new frontier, their mission? Venture deep into uncharted space and explore the hell out of it in this new visual novel.

The game is about giant robots, star ships and the relationship between three girls. Inspired by 50’s and 80’s Scifi, Pulp Fiction, and Mecha anime! A self contained story, and while we’re open to the idea of making more stories in the future, Lupiesoft are designe the game around self-contained adventures for the Stargazers Squadron in the style of pulp fiction. Stargazers is a yuri game, showing the relationship between a group of 3 girls and their time together.

By now humans have explored much of the inner Milky Way galaxy but not much of it’s outer reaches. Their mission is to patrol along an uncharted rim of the Milky Way Galaxy, to chart, explore, establish telecommunications, and a foothold between the outer galaxy and the inner galaxy. Not much happens in this reigon of space, but when the Stargazers are nearby it doesn’t take long for them to find some trouble!

The Stargazers is now available on Steam for Linux, Mac and Windows PC with a 10% discount until November 11th.

The Barbarian and the Subterranean Caves visual novel releases