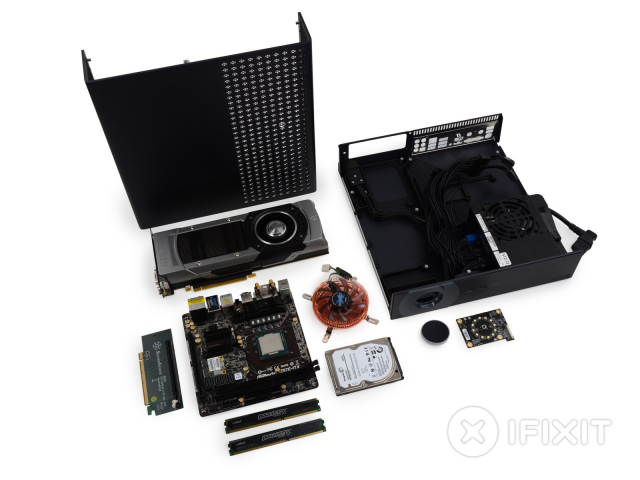 The prototype Steam Machines Valve recently sent out to 300 lucky beta testers are just prototypes that Valve says aren’t indicative of the final form SteamOS-powered devices may take. They have even less in common with the third-party designs already leaking out or the roll-your-own SteamOS machines hobbyists are building.

That doesn’t mean there’s nothing to be learned from seeing just how Valve builds its first piece of PC gaming hardware, though. iFixit has cracked open a prototype box sent to staffer Christopher Patton. Its teardown finds an easy-to-open case locked by a single, standard Philips head screw. That box is full of standard, off-the-shelf PC parts, which isn’t surprising; all Steam Machines are, in fact, just standard computers running SteamOS, often in a console-style form factor.

This box’s modular design packs a lot of pieces into a very small space, using custom plastic risers, internal walls, and many extension wires to manage airflow and positioning. It’s still relatively easy to get to everything for repair or replacement, iFixit says, though the two RAM sticks are apparently a bit hard to jiggle out of their clips.

On the back of the box is a bevy of ports appropriate for a standard gaming PC, including 6 USB ports, HDMI, dual-link DVI and DisplayPort outputs, SPDIF digital audio, and even PS/2 keyboard/mouse inputs. On the front, there’s nothing but a large, LED-lit power button. The model iFixit got its hands on is the one with a ZOTAC GeForce GTX 780; combined with the rest of the components, the whole thing comes to about $1,300 at retail.

The iFixit crew also opened up the new Steam Controller, which needs special hex screwdrivers to open. Unlike the controllers Valve will release next year, these controllers are strictly wired by USB, meaning they don’t need any space for a battery or wireless antenna. The prototype controller also has four buttons where the central touchscreen would be, making direct comparisons to the final controller release a bit tough.