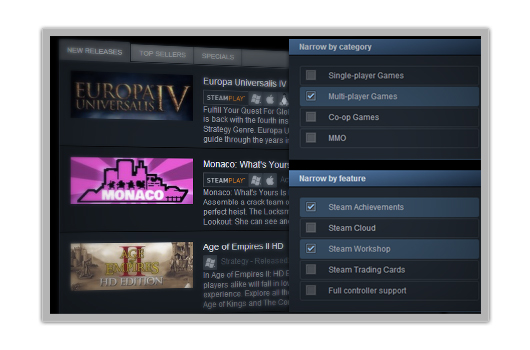 Steam Tags, the system where users of the #Steam digital distribution service and storefront assign keywords to games, has exited #beta testing. Valve announced the change earlier this week via a news post, but noted that the removal of the b-word is “mostly a cosmetic change.”

Valve reasoned that the change feels cosmetic due to the fact that Steam Tags will continue to evolve and change. For example, it used to be that tags were divided by language, so that the list of tags for Russian users would be different from the list of tags for English users, and so on. However, the news post notes that many languages had so few tags that they were disproportionately full of bad data such as inappropriate tags and joke tags. Hence, all language pools will now be combined and then translated where needed.

Tags with similar concepts are also being merged. The post brings up how Valve noticed four variations of a tag advertising a game that supported mods – “modding,” “mod-friendly,” “moddable” and “mod supported” – so now, if a user types in “mod-friendly,” you’ll actually see the “moddable” tag appear.

Whether these changes sound good or bad, Valve invites you to share feedback with them on the subject.

Valve now enables modders to sell their creations on Steam