The Netflix’s Twilight Zone-like horror Stranger Things, an ’80s-inspired #mystery has been turned in a short indie game for #Linux, Mac and Windows PC. Called ‘Stranger Things Tribute Game’, a point and click gaming #adventure has been developed by Infamous Quests. The news is, people who played the game have the impression that is portion of what is to be a much bigger release.

“The disappearance of Will Byers has the town of Hawkins, Indiana – and Chief Jim Hopper – on edge.”

The tribute game features a single scene from Stranger Things the first season. Coming complete with Chief Hopper, Callahan, Powell, and of course the favorite Mr. Clarke. They are out in the woods trying to locate Will Byers, who went missing from episode 1. You find a clue, something happens, then the game ends. 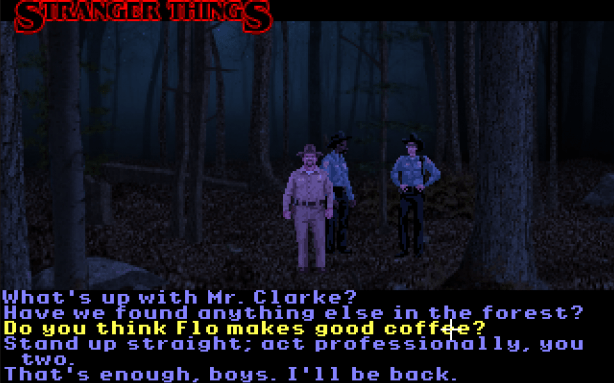 The demo can be downloaded for free on its website. Players take on the roll of police chief Jim Hopper in the early parts of the series, searching for clues about why Will Byers has gone missing. While very short, the game does give a significant taste of what it would be like to experience Stranger Things from a point-and-click perspective.

If you want to get a copy of Stranger Things‘ tribute game for Linux, Mac and Windows PC, get the Free download here.