At Sundown is impressive, play the games demo 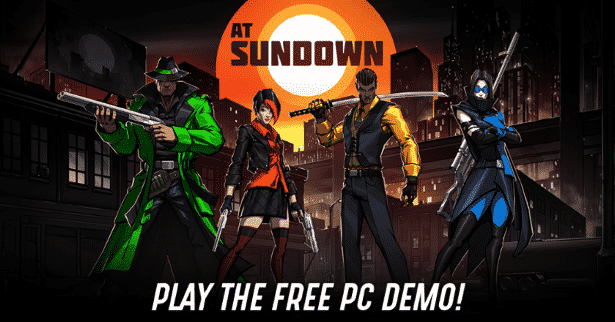 At Sundown is an arena deathmatch shooter just released their Demo in Linux, Mac and Windows games on Steam. Which is also, surprisingly good.

So independent video game publisher Versus Evil hold responsibility. Of course they are in partnership with independent developer Mild Beast Games. Now having a reveal for their BAFTA winning, top down shoot ‘em up, At Sundown. Which is also launching on Linux, Mac, Windows, PlayStation 4, Nintendo Switch and Xbox One in Spring 2018.

At Sundown is a stealth-based arena shooter. Since 4 players will compete in online and local deathmatch games. Action takes place under the cover of darkness. Where players can only be spotted when they shoot. Sounds good, right?
Well this spotting also work when you dash or walk into a light source. So be mindful.

At Sundown coming to Linux, Mac and Windows

So, players eager to take on their friends in total darkness. Can now try out At Sundown the demo on Steam for free, which does include a Linux download.

The demo give players access to 4 out of the total of 11 launch weapons. All on a selection of map levels set in the Garden and Mansion. Since you can play the demo with keyboard or controller, it’s your choice. Also giving players an opportunity to play online in local matches or against bots.

“Mild Beast Games have a created an award-winning multiplayer formula. One that totally hooks players from the outset. At Sundown has been a real crowd pleaser at events like PAX. Where it won players over with its superb 4 player party set up. We’re really excited to announce the games’ cross-platform launch. Which underlines our commitment to bringing out the best in our indie partners,” commented Versus Evil General Manager Steve Escalante.

Winner of the coveted ‘One to Watch’ Award at the 2016 BAFTA’s. At Sundown also won Microsoft’s 2016 Imagine Games award with its innovative game design. Since gameplay uses darkness and sporadic light source effects to create a tense yet highly competitive multiplayer game for up to four players.

At Sundown will feature a wide variety of weapons for players. So you can choose from including pistols, sniper rifles, shotguns and bladed weapons. Also multiple maps, each with different light mechanics. Now to mention some frenzied 4 player deathmatches. Players can also team up cooperatively to take down AI opponents or face off in head to head showdowns.

At Sundown set to launch Spring 2018. We do not have an official release date yet. But we will update this post as soon as we have some confirmation.
In the mean time, expect a day-one Linux release beside Windows and Mac.