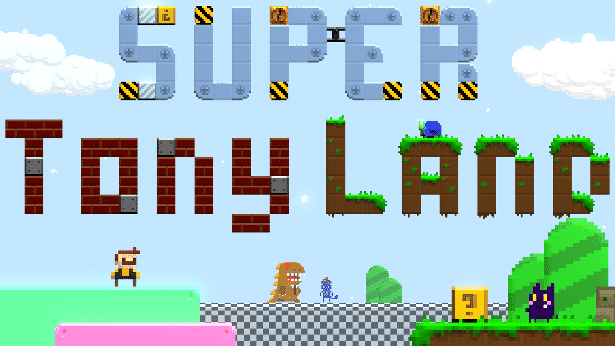 Super Tony Land debut on Kickstarter for Linux, Mac and Windows. The games developers, Robot Loves Kitty are always up to some creative high jinks. So now that their crowdfunding campaign is live. The project is also more than 60% funded of their $5,000 USD goal.

Super Tony Land is not only a side scrolling platformer. It is also a crazy powerful level editor. So this lets players build your own challenges, worlds and unique stories.
Also assembling all kinds of physics based contraptions, traps, and vehicles. And as long as can connect a controller. This also means players can use this as well. Assigning whatever buttons or keys you’d like.

Since Super Tony Land is a PC platformer. This also means level editing and sharing like Super Mario Maker. Also lite storytelling like Cave Story. But lets not forget about some physics nonsense like Besiege.

In the editor players can even build with blocks of visual code. Since this means programming their own game traps. Including Twitch interactions, dialogue and more. So entire custom game worlds can be made and shared. AND players can change the lighting for their levels. How’s that for detail?

Super Tony Land is still in development, but is nearing release. Which means the games in a good place for Kickstarter. That goal for Robot Loves Kitty, build an early community of awesome and passionate players. Then add some neat backer created content into the game before launch.

All game tier backers will get access to the beta. As soon as the Kickstarter has processed. Therefore Early Access on Steam will likely be launching in late March to ensure a smooth release.

So what’s in it for backers? This means getting closed beta access. Also custom items like blocks, power ups and characters in the game.
Also, the Super Tony Land beta is Windows only. But as Robot Loves Kitty progresses, this means Linux and Mac versions will follow.

Super Tony Land is currently over 60% funded on Kickstarter. The crowdfunding campaign is doing well. And since we can expect Linux support, we are looking for to the release.