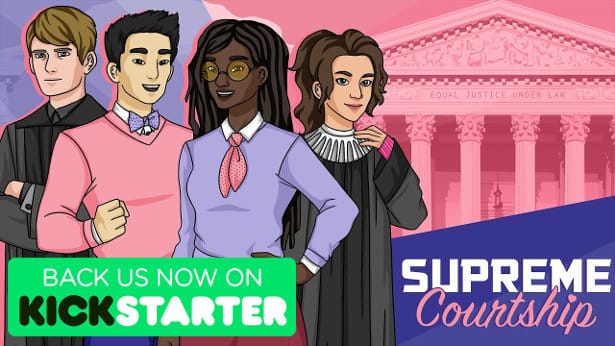 Supreme Courtship bring humour to Kickstarter games for Windows, but what about Linux? Reaching out to developer Just Us Games answers this question. Since the game just launched on Valentines Day. Including a Free Windows and Mac Demo. And the crowdfunding campaign is currently 32% funded.

So, when it comes to visual novels. They come and go. Well they seems interesting for a week, then it’s game over. Now we have a different takes on the genre. It looks interesting, plays well and maybe your thing too.

In Supreme Courtship you are now the 9th Justice on the Court. Therefore it’s your task to make rulings. They are so important that they will change the course of history forever. And it’s your first day. Gulp! But fear not, you’ll learn the ropes from the young and stylish alter egos. Such as judicial superstars as Ruth Bader Ginsburg, Sonia Sotomayor and John Roberts.
Since being a Justice isn’t all work and no play. You will also spend time with the Justices outside of the Court. This might earn you some influential new friends.

“We are using Unity as our Game Engine.
No promises on a Linux port yet, but we’ll be looking into it!”

Developer Just Us Games seem fairly favourable support. Since the games coming to Mac and Windows. And there’s a live Demo available. Which you can play using Wine or even Proton.
However, make sure to Wishlist on Steam. The more Linux support we have the better.

Thanks for the great article! 😄😄

I used to use #Ubuntu primarily, so a #Linux version of the game is definitely something I’d like to work on! 💻

Here’s where things get interesting. Supreme Courtship is the world’s first judicial friendship simulator. Inspired by the warm hearted humor of Phoenix Wright. Supreme Courtship aims to provide an appealing, comical adventure. But also to teach players about the people and procedures of the Supreme Court.
Since every Justice is based on their real life counterpart. With Just Us Games having gone to a ridiculous amount of work. Making sure to precisely recreate each Justice. While focusing on their background and political ideologies. Also what they looked like when they were younger.

Supreme Courtship is more than mere satire. It’s also a crash course. On that includes an unnoticed branch of the US government and how it operates.

So how can you help Supreme Courtship, an educational comedy game with a goal for good, make it to players like you? Easy! Check out its Kickstarter crowdfunding campaign. Running from February 14th until March 16th. Just Us Games aims to raise at least $32,000 USD. Currently 32% funded with 25 days to go. And hopefully hit a few nifty stretch goals along the way.
Thankfully, there’s a free demo (Windows, Mac). So you can get a taste of what comical courtroom capers lie in store for you when Supreme Courtship launches next year.