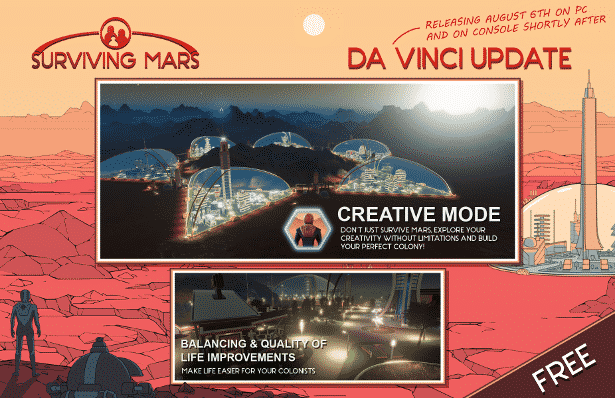 Surviving Mars gets a Free Da Vinci and Sagan Update for Linux, Mac and Windows. This will also bring about Creative Mode. Thanks to Haemimont Games.

So here’s the deal. Paradox Interactive, a publisher and developer of games, now let’s you master your own universe. Therefore we have two new free updates for Surviving Mars. The survival management game from Haemimont Games.

This comes as “Da Vinci,” or Creative Mode, will allow players to take more creative liberties, helping your Martian colonies. This update also includes stress-reducing features. Such as buildings that do not require maintenance. Immortal colonists and a starting budget of $100 trillion.

While the “Sagan” update, for the explorer who felt that surviving the inhospitable desert of Mars was simply too easy. This will launch on all platforms this September. Which also includes 24 major challenges to overcome.
This update adds a new level of difficulty for the hardcore survivalist. Well those who are ready to take a running start at everything the red planet can throw at them.

So whether you like to stop and smell the barren wastelands of Mars. Or you’re raring to discover new ways to doom your dome. Surviving Mars’ upcoming updates will have adventures for every type of player.

Surviving Mars is available on Steam, GOG and Humble Store, priced at $39.99 USD. So of course these updates support Linux, Mac and Windows.

Also to find out even more about Surviving Mars. Make sure to check out upcoming news and community activities on SurvivingMars.com.