North American pre-order customers will receive an alternate costume, Scrub Abe, that consists of a factory cleaner’s garb. That pre-order bonus will be available on launch day, while Alf’s Escape, a new area of RuptureFarms, will be released shortly after launch. Alf’s Escape offers some challenging puzzles that will “ensure a fresh challenge for even the most seasoned Oddworld fans,” according to Oddworld Inhabitants, along with some dialogue recorded just for that level.

Oddworld: New ‘n’ Tasty will cost $29.99 in North America, and Oddworld Inhabitants has reduced the price in the U.K. and Europe to bring it in line with the North American price: The game will cost £17.99 in the U.K. and €20.99 in Europe, the company announced today. Customers in those regions will be able to get the Scrub Abe costume and Alf’s Escape mission as long as they’re PlayStation Plus subscribers and buy the game within two weeks of its release date.

Developed by Just Add Water, Oddworld: New ‘n’ Tasty will be available July 22 in North America and July 23 in the U.K. and Europe on PlayStation 4. Oddworld Inhabitants is planning to allow pre-order customers to download the game “a day or two early” and start playing at midnight on their respective launch days.

The company is supporting Sony’s cross-buy program, so buying New ‘n’ Tasty on PS4 will also unlock PlayStation 3 and PlayStation Vita copies of the game and bonus DLC once those versions are released. Oddworld Inhabitants said today that it is “still trying to launch the PS3 and Vita versions as soon as possible after the PS4 version.” New ‘n’ Tasty is also in development on Linux, Mac, Wii U, Windows PC and Xbox One; the publisher noted that the two aforementioned add-ons will be available on other platforms. 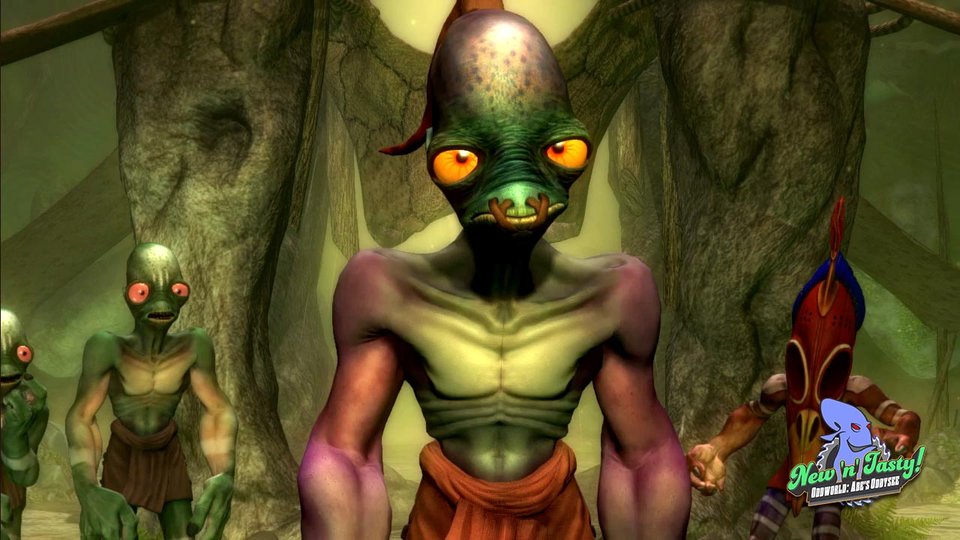 Oddworld New n Tasty, #OddworldInhabitants’ upcoming 2.5 side-scroller, will launch on the PlayStation 4 June 22 in North America and June 23 in Europe, according to the official Oddworld Twitter account. PC, Mac and Linux #release dates have not been announced.

New ‘n’ Tasty, the remake of 1997 PC side-scrolling puzzle platformer Oddworld: Abe’s Oddysee, is also slated to launch on Wii U, Windows PC, Mac, Linux, PlayStation 3 and PlayStation Vita at an unannounced date. The title will feature cross-buy and cross-save compatibility across all PlayStation platforms.

To learn more about the title, be sure to watch a recently released trailer that offers a deeper glimpse into the game’s story and tribulations that protagonist Abe will face on his quest to free the slaves of the meat processing Rupture Farms.

+OddworldInhabitants, a cache of screenshots was released for the newest installment in the Oddworld series, Oddworld New N’ Tasty. This newest Oddworld title will be released on OSX, PC, #Linux , #PS4 , and on the Nintendo eShop.

This is a title that’s been dancing around the rim of release for quite some time. It was initially announced that a new Oddworld title would be released as far back as 2008. However, at the time of the announcement sources did say that due to the level of detail that developers Just Add Water planned to implement, development might take several years.

Five years later here we are with some stunning screenshots of the game finally hitting the internet. And I have to say, true to its name, the newest Oddworld installment looks new and tasty. The graphics are the best we have ever seen from the series by far,  while it’s tough to glean insight into the game’s story, it’s clear that Oddworld will retain its signature brand of oddball humor.