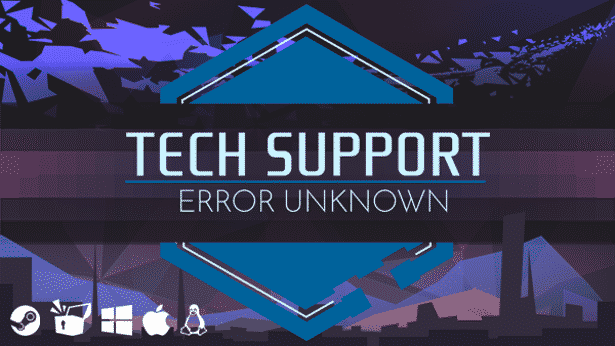 Developer Dragon Slumber officially announces the release date, February 27th, 2019. Tech Support: Error Unknown will also be launching on Linux, Mac and Windows via Steam. Including both Gamejolt and Itch.io.

The award-winning adventure (Best Indie Pitch, MIGS18) casts players as a new-starter. While taking places in the IT department of multinational corporation. Hence Quasar Telecommunications. Where, you also discover, all is not what it seems.

While working from the Spectrum OS virtual desktop interface. Tech Support: Error Unknown will have players will chat with customers and colleagues. Also communicating through an organic procedural dialogue system.

This means solving puzzles and making further discoveries. Plus further choices that radically affect the eventual outcome.
Will you serve the company? Or caus mischief from within? Every choice matters.

The official announcement follows a long tug-of-war online. Between Quasar and Tech Support’s hacker gang, Indigo.
In the game, a bond with the group is also an option. And one of the many available paths to pursue. Since they are proving to be a serious problem on social media.

Indigo first takes over all Tech Support: Error Unknown channels on January 16th. While posting a series of videos. Attacking both the design and features of Quasar’s Spectrum OS.
While the company does regains control, 5 days later. That control almost immediately taken over again on January 23rd. As Indigo also publishes yet another video.
Now the hacktivist’s leader Indigo Fox appears in-person. Where he also urges viewers to use Spectrum OS against Quasar. At least when it’s available. Then he drops the release date for eager fans. Issue details almost 1 week early.

The reception for Tech Support: Error Unknown thus far has completely blown me away. And I couldn’t be more excited. Getting the full version in player’s hands. Although I can’t ignore Indigo’s vigilantism. I do believe that these allegations against Quasar. This should be judged under the due process of the law.

Eager seekers can try the free demo on Steam, Itch, Gamejolt. Since this is available for Linux, Mac and Windows. Make sure to join the Launch Day Live Stream. This will be available through the Steam store page. And Wishlist the game to get the announcement of the full release.