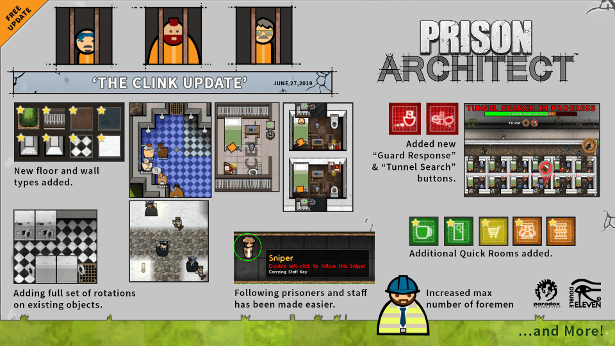 The Clink Update is now live for Prison Architect in Linux, Mac and Windows PC games. Thanks to Introversion Software and Double Eleven. The games also heavily discounted for the Steam Sale.


Prison Architect has also been downloaded by more than 4 million players. Doing so across Linux, Mac, Windows PC. Including console and mobile since release. Which is impressive see we have continued updates.

Also, in addition to the download milestone. Paradox Interactive partner with Double Eleven. The studio supporting Prison Architect on console. So they can continue developing both on PC and console. With new expansions on the horizon. Which is impressive considering the history of Alpha builds. The Clink Update is certainly welcomed too.

Check out this video to learn more about Double Eleven. While they answer questions from the community. And also give insight into their commitment to Prison Architect.

“Double Eleven has done an excellent job. Supporting Prison Architect on console since 2016. And the games community loves what they bring to the table,” Steacy McIlwham, Product Manager for Prison Architect at Paradox Interactive, said. “We are confident in Double Eleven’s ability. To continue improving upon an already great game. And they have our full support.”

To kick off partnership with Paradox Interactive and Double Eleven. They have released The Clink Update. Now live for Linux, Mac and Windows PC. An update that adds enhanced Guard features. Additional cosmetics and a wide range of changes. Since these are the requests from the Prison Architect community.

The first gift to players is The Clink Update for FREE. Since this includes 4 new floors. Also 4 new walls, increased foreman cap and guard responses. A fix for scanners, more quick rooms and tunnel searches. Full rotations for items. And also a few more fixes/changes that they hope players will like.

Plus Paradox have a huge Sale. Both on Paradox Plaza and also on Steam. So no matter your choice, you will save big.