The hard lessons of game development for Dungeon Defenders 2 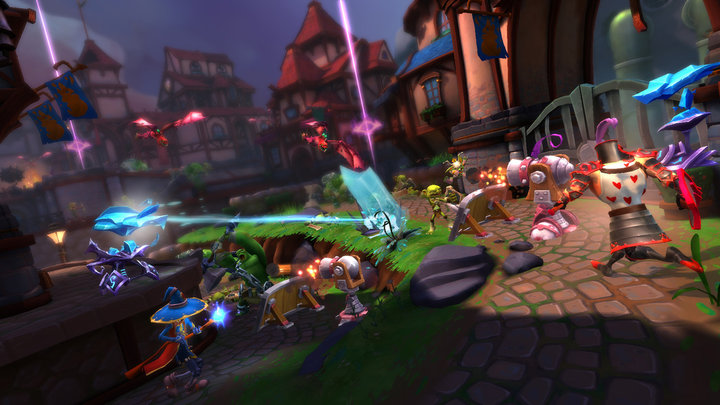 Trendy Entertainment began working on a #sequel to its breakout hit, #DungeonDefenders, about a year ago. This past June, after revelations of terrible working conditions at the #studio emerged, the company decided to reset #development on the game. Last week, Trendy re-introduced #Dungeon Defenders2 as a much more iterative sequel, and according to representatives of the studio, that’s the kind of #game that everyone there really wants to make.

Under previous Trendy president Jeremy Stieglitz, the studio originally took Dungeon Defenders 2 in the direction of League of Legends, adding multiplayer online battle arena (MOBA) elements that represented a major shift from the role-playing/tower defense hybrid of the original game. But in addition to Stieglitz’s management style — which was reportedly that of a domineering boss — it turned out that very few members of the team at Trendy were actually interested in making a MOBA, according to marketing director Philip Asher.

That, coupled with a poor reception to the MOBA elements and Trendy’s growing pains as a studio, all came to a head four months ago.

“I think that that was a wake-up call to everyone in the studio that communication had completely fallen apart,” said Asher during a recent interview with Polygon, speaking of Kotaku’s report on the problems at Trendy under Stieglitz.

“We were 14 people who were used to working together for years, expanded to a medium-size studio to try to make something that we thought would be impressive. But communication had fallen down,” Asher continued. “Like, we didn’t know how to run as a 50-person studio. We didn’t bring in the right people to help us run as a larger studio. And we got really far into a project that not everyone recognized [wasn’t] working, that our fans didn’t want to play.”

After numerous internal discussions, Trendy officials moved Stieglitz off Dungeon Defenders 2 and gave the project to studio director Dave Lloyd, who has been instrumental in leading the charge toward the game’s new direction.

“Upper management made, in my mind, what [were] all the right decisions to put this project in the right hands to really get something out that the fans cared about, and that’s what was important,” said Asher. “And if you were at our studio, it’s a night-and-day-difference between what it was before and what it is right now.”

Trendy has spent the past four months working on the new Dungeon Defenders 2. The studio is looking to take everything in the original Dungeon Defenders and make it better, while retaining the same basic gameplay that was so successful in that game. The sequel stars the same four heroes — the Squire, Apprentice, Monk and Huntress, although they’ve aged from children into teenagers — and they must defend the land of Etheria once again.

One of the major ways in which Trendy wants to evolve Dungeon Defenders‘ gameplay for the sequel is to deliver “complex tower interactions,” said Joshua Javaheri, the game’s lead technical artist, during a hands-on demo of a pre-alpha build of Dungeon Defenders 2.

In the original game, you could put different types of towers next to each other to bolster your defenses, but their individual abilities would remain distinct. This time around, if you plant different towers in the same area, you’ll see their powers combine with increased effectiveness. We dropped a frost tower and a wind tower together and watched the results with glee: The enemies were frozen first, and then the wind tower generated a cyclone that sucked up the hunks of ice; they shattered as they hit the ground.

This applies to the different characters’ skills, too. As the Huntress, we laid down a geyser trap, which lifts enemies into the air. That allowed the Monk to unleash his anti-air attack on the suspended foes. The Squire’s towers can fire cannonballs, which are also very useful against enemies frozen by ice towers. And because enemies take damage from falls, you can set up a frost tower by a ledge and then have the Monk use his chi blast power — effectively a Force push that also buffs teammates in the vicinity — to send frozen enemies plummeting to their death.

“We’re really, really trying to get the players involved in the strategy for all the waves [of enemies], not just when they’re placing towers and then they just play a mindless action game,” said Asher.

Trendy is trying to make Dungeon Defenders 2 a more strategic experience in every facet of the game. Instead of just upgrading a tower’s stats, you’ll now upgrade them to different levels, where you’ll see a change in the tower’s appearance as well as a more powerful ability. You also have the option of repairing towers, which costs less green mana than upgrading. In the build we played, there was no limit on the number of towers you could put down, but that may be different in the final game.

Another notable change comes in the phase of gathering resources and building towers. Treasure chests in the levels now provide two different kinds of mana: Blue mana goes toward characters’ abilities, while green is for towers. Asher explained that many Dungeon Defenders players shied away from using their characters’ powers, because there was only one resource pool and they wanted to save it for towers.

Trendy had to learn some hard lessons

You also have more things to worry about on the maps — in addition to the main gate lock you need to defend, the stages contain sub-objectives. This also means that rounds no longer have a single loss condition, but if you lose those side gates, it will open up additional lanes for orcs to pour into the arena.

We were playing the Windows PC version of Dungeon Defenders 2, which is currently in development on Mac and Linux as well. That seems surprising, since the first game saw tremendous success on its debut platforms, iOS and Android. According to Asher, the decision to focus on computers for now came out of lessons that Trendy had to learn the hard way.

“We were limited to an extent with what we were doing before, in terms of everyone’s talents at the studio and working on a mobile title. And that really was festering and came out,” said Asher. When the developers sat down this past June and discussed their options, they realized that “everyone wants to make a PC game.”

Although it’s coming out on computers, Dungeon Defenders 2 will be a free-to-play game when it launches next spring. Asher said Trendy is still figuring out the details of the game’s business model, and told us, “We have a couple of really cool ideas, which I don’t want to talk about yet, but they’re ideas that don’t affect the core gameplay.”

He added, “We’re not going to make a game that we don’t want to play.”