The Talos Principle punishes pirates for stealing the game The Talos Principle, a philosophically-inclined first-person puzzler from #SeriousSam #developer Croteam, #punishes pirates that steal the game by trapping them in a particular elevator at a key point of progression.

One such thief fell for the honeypot and outed themselves on the game’s Steam forum. Although the original post appears to have been taken down, it was recorded by a NeoGAF user and shared on publisher Devolver Digital’s Twitter for shaming.

This is not the first foray into gameplay-linked piracy protection from the Croatian developer Croteam. In 2011, Serious Sam 3: BFE featured an immortal pink scorpion that would only appear in pirated copies of the game. The fleet-footed, invincible nightmare relentlessly pursued the player from the opening moments of the game, making it nearly impossible to play.

Punishing piracy in-game has become an increasingly popular solution to the age-old problem of illegally-copied digital games. Croteam’s solutions are reminiscent of what Kairosoft did with Game Dev Story, a game development simulator wherein illegal copies featured in-game pirates that would steal the player studio’s games until it went bankrupt.

Clever, in-game ways to actively punish pirates are an appealing alternative to restrictive, universal digital rights management policies, such as requiring a constant internet connection to play. These DRM practices often provide more frustration to legitimate owners of the game than pirates.

The Talos Principle, released on December 11 for Linux, Mac, and Windows, a first-person puzzle solving game that feels like a cross between Portal and Myst. It features a growing set of reconfigurable elements, such as blocks and lasers, but infuses its head-scratching action with a philosophically rich story to uncover through careful exploration. 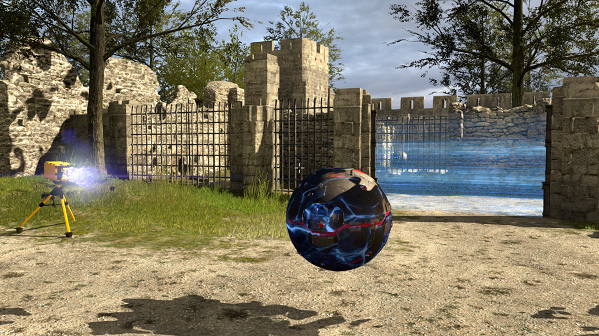