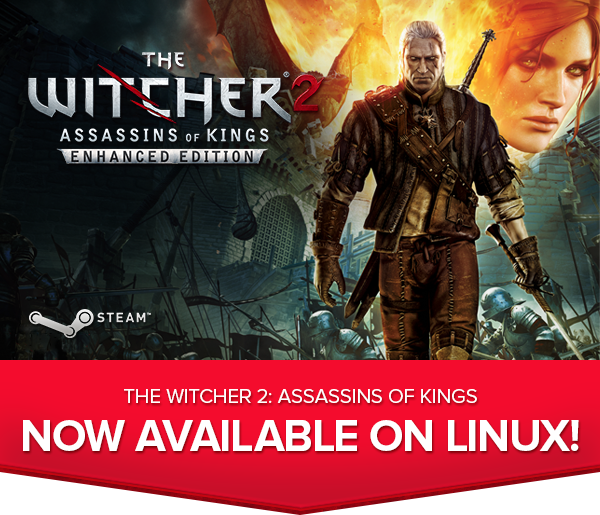 CD PROJEKT RED, the developer behind the Witcher franchise of games, is excited to announce the release of The Witcher 2: Assassins of Kings Enhanced Edition for the Linux operating system.

With 98 awards garnered, including several Best Of and Game of The Year awards, The Witcher 2: Assassins of Kings makes its debut on Linux, bringing an unforgettable fantasy adventure to RPG fans on the platform. Spinning a mature and thought-provoking tale of monster hunter Geralt of Rivia, the game offers some of the most iconic and recognizable moments in contemporary RPG history.

“We’re really pumped to be able to invite RPG fans who use Linux to the party,” said Marcin Momot, Community Manager, CD PROJEKT RED. “The Witcher 2: Assassins of Kings is one of the greatest fantasy adventures on Linux, and I’m sure every role-playing enthusiast with a craving for some quality questing will have tons of fun playing the game!” Momot added.

The Linux version of the game contains all off the previously released updates and content, so gamers can enjoy the most complete version right from the start. The Witcher 2: Assassins of Kings is available on Steam.

To celebrate the release, together with our partners from Valve, the studio also launched a special two-day 80% off discount for The Witcher and The Witcher 2. For more details, visit Steam.

In a time of untold chaos, as crowned heads roll, nations rage and kingdoms topple, witcher Geralt of Rivia must clear his name, revealing the conspiracy that has placed the world in peril and threatens the lives of his loved ones. Featuring a mature and non-linear story, spectacular real-time combat, stunning visuals, and a vast, immersive game world, The Witcher 2 provides dozens of hours of intense, thoroughly immersive, emotionally charged gameplay.

The system requirements for The Witcher 2: Assassins of Kings Enhanced Edition are:

OS: Ubuntu 12.04 and SteamOS
(other distributions of Linux might run the game, but are not supported)

Special notice: Together with AMD, we are working to bring Radeon™ graphic cards support for the game but, at this moment, linux gamers using AMD hardware will not be able to launch The Witcher 2: Assassins of Kings. We will issue a press statement when the drivers are ready.

About CD PROJEKT RED
CD PROJEKT RED is a development studio established in 2002 and based in Warsaw and Cracow, Poland. Creators of The Witcher and The Witcher 2: Assassins of Kings. Both RPGs were praised by critics and fans, gathering over 200 awards and selling over 7 million copies to date. Originally a PC developer, CD PROJEKT RED has also released The Witcher on Mac and The Witcher 2 on Xbox 360, PC and Mac. The studio is now working on The Witcher 3: Wild Hunt, a fantasy RPG with a character-driven, non-linear story set in a vast, open world. The game will be released in 2015 on Xbox One, the all-in-one games and entertainment system from Microsoft, Playstation®4 and PC. The developer is also working on Cyberpunk 2077 in collaboration with Mike Pondsmith, the original designer of the pen-and-paper Cyberpunk® futuristic RPG system in which the upcoming game is set. CD PROJEKT RED’s mission is to take the passion they have for games and harness it to make the best RPGs in the world. Along with GOG.COM, the Internet’s leading destination for the best DRM-Free games in history on PC and Mac, CD PROJEKT RED is part of the Warsaw Stock Exchange listed (ISIN: PLOPTTC00011) CD PROJEKT Group.