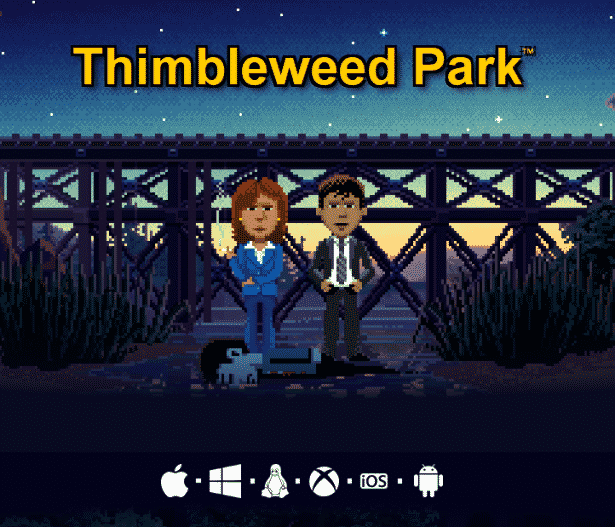 So you think the Thimbleweed Park coming in 2017, is one of those #games about #solvingamurder? Well, you’re *beeping* wrong! At least, that’s what Ransome the Clown believes. Hence the latest release news.

Ransome is one of the games five playable characters in Thimbleweed Park. Hence the new adventure game from those *beeping* *beeps* Ron Gilbert and Gary Winnick. What, you’ve never heard of them? They’re only the guys who *beeping* invented the genre with Lucasfilm’s Maniac Mansion…

Since he’s obviously a jerk, but Ransome’s not full of *beep*. When he says that in Thimbleweed Park, a dead body is the least of your problems. So between the haunted hotel, the giant pigeons clucking about “signals”. And the town founder’s obsession with vacuum tubes, this place is *beeped* up. Nobody in this town can be trusted — not even the two *beepers* trying to crack the case!

For some other perspectives on what the *beep* is going on, check out these earlier trailers:

Oh, and did you hear about the toilet paper scandal? Don’t people have better things to worry about than *beeping* toilets?

Thimbleweed Park is a dark comedy/mystery adventure from Ron Gilbert and Gary Winnick, the guys who basically invented graphic adventure games with LucasFilm’s Maniac Mansion. They still love point & click, and they want to remind you why you love it, too — or why you should start! No matter what you think Thimbleweed Park is at first glance, Terrible Toybox guarantee it’s not what you’re expecting.

Let’s face it: in a town this weird, with a mystery this big, the *beeping* locals can’t be trusted to get to the bottom of things. Sorry, but you’re going to have to get your hands dirty when Thimbleweed Park releases for Xbox One, Windows, Mac, and Linux in a month or two. This game ain’t going to play itself.

For details on Thimbleweed Park and Randome the Clown, check out the official website.