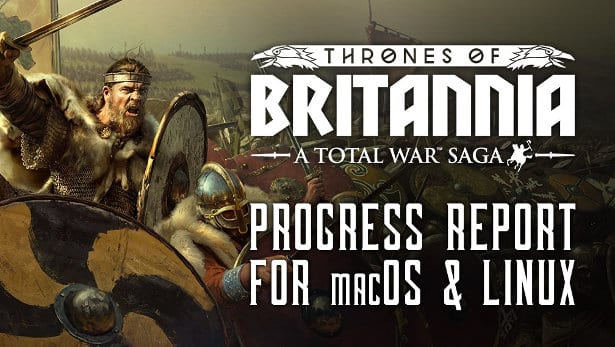 A Total War Saga: THRONES OF BRITANNIA release date for Linux and Mac has been in question. So as of just recently, Feral Interactive released a livestream of gameplay on Mac. Boasting what eager gamers can expect prior to the official release. Which is actually quite impressive and well worth watching.

Also with this comes further details. Hence a release date of sorts. When we can expect a Linux and Mac debut.

With THRONES OF BRITANNIA being released for Windows this week, we have an update for macOS and Linux monarchs.

We are closing fast on the macOS and Linux versions, and are currently *aiming* for macOS and Linux releases one to two months after the Windows release on May 3rd. pic.twitter.com/VfkTMpYlHu

So this is the official news for Feral Interactive. Which is quite a substantial difference in what we might expect. Such as Total War: WARHAMMER that launched on Windows in May, with a Linux release in November of 2016.
Therefore, that two month turn around for Mac and Linux is more reasonable.

While we previously saw the new Politics and Intrigue Feature Spotlight trailer. Highlighting some of the machinations that can come as you exercise power over the torn and fragile British Isles. This is available in the gameplay from Feral Interactive below.

While playing the role of the English, Welsh, Gaelic, the great Viking army or the kings of the sea Vikings. Players of Thrones of Britannia must be broken up. Since they will explore the dark arts of politics, using all the methods available. Working to achieve their ends. So this means arranged marriages, despoiled estates and bribes. And also in the most extreme cases, assassination.

A Total War Saga: THRONES OF BRITANNIA will be available on May 3rd. Pre-orders are open in digital format at Steam and Humble Store with a 10% discount. Priced at $35.99 USD including the 10% discount until the May 3rd release.

Creative Assembly will also donate 25% of its pre-order profits from Thrones of Britannia until its launch at War Child UK.

Meanwhile Life is Strange: Before the Storm is also seeing some activity on SteamDB. Wow, this is impressive indeed. And quite a pleasure over the Thrones release.