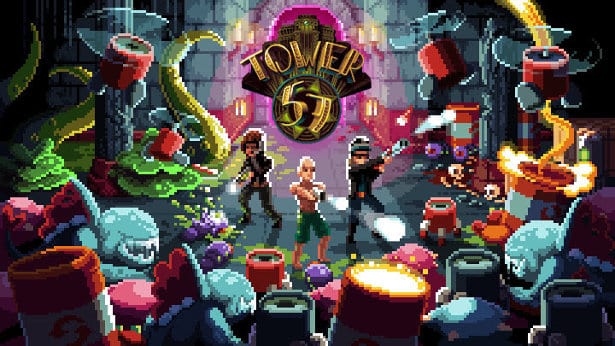 Tower 57 is a throwback to the days of Amiga gaming. Back when the focus was on fun gameplay above all else. No loot boxes, grinding or min-maxing. Just you and a buddy having a good time.

So comes the toxic tentacles, blood-thirsty science experiments and five arm replacements. But hey, if you’re into explosive munitions, the perks simply can’t be beat. Hence the latest from Pixwerk and their debut for Tower 57. The games release date will be on November 16th, 2017. Yet Pixwerk do indeed have Linux in mind:

Sorry for the late reply, I’m crunching like crazy for the launch in 2 weeks!

There’s definitely a Linux port planned but sadly it won’t be a day-one release.”

So the lack of Linux kind of sucks. The games release is two weeks away and due to release on Mac and Windows. Yet we do have confirmation a native build will be coming. Since Pixwerk are obviously swamped getting the release in gear for the release date.

Tower 57> is a neo-retro shooter inspired by the heights of Amiga gaming. All set in a dystopian, dieselpunk world where Megatowers have become the last enclaves of civilization.

Choose from six extraordinary individuals, each with their own skillsets, and infiltrate the reclusive Tower 57. Shoot your way to the top with an eccentric arsenal of weapons and gadgets while trying to keep your limbs intact – those vending machine replacements can get pricey.

With local and online co-op, Tower 57 is even better with a friend. Bait and flank your enemies, combine weapon types for unique effects, and give your friend a lift when they’re down. After all, two legs are better than none.

Developed by Pixwerk and published by 11 bit studios, Tower 57 is coming to Mac and Windows on November 16th, 2017. With a Linux release to follow later (no official date yet). The games coming to Steam and GOG. While Humble Store has a 17% discount until release. You can grab the game for $11.99 (USD). So it will be cheaper if you buy a 2-pack for you and your friend. Then, it’s only $19.99 USD.