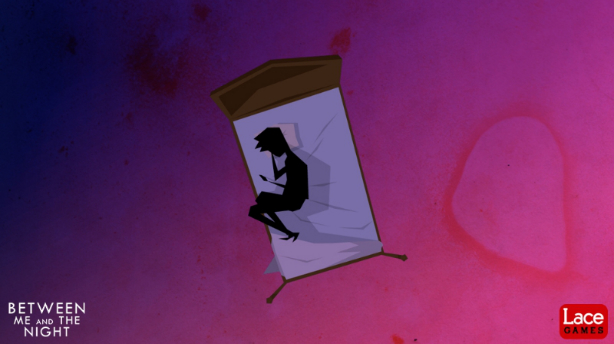 Between Me and the Night is a surreal #exploration, puzzle and adventure game for Linux, Mac, and Windows PC that deals in dualities. By day, the nameless young boy can explore his floating house and unlock new rooms to boost his skills. By night, he #encounters and must conquer the fears of his mind, both in the house and while slipping into psychedelic slumber.

“Lace Games are delighted to have entered this partnership with RainDance LX and to help this talented team bring their gaming vision to the world’ said Adam Lacey, CEO of Lace Games. “We are very pleased, with the backing of our investors, to be able to finance the development of Between Me and The Night and support this newly created studio through our funding.” continued Lacey. “With Between Me and The Night already well supported by the Steam Greenlight community we are positive that the game will be a huge success when released in mid-2015”.

Joao Ortega, CEO of RainDance LX said  “We are very excited to work with Lace Games to bring Between Me and the Night to life. One year has passed since we were just students dreaming about this project in Lisbon, and now we are back to this beautiful city to turn this dream into a reality. This investment makes all the difference for us, now we can focus 100% on making Between Me and the Night the best game we can, and with all the creative control and liberty that Lace Games gives us we can make exactly the game we planned from the beginning.” Ortega continued “We could not imagine a better outcome when we started working on our student project back in 2012. We have come a long way and all the love the community has given us – being Greenlit in Steam; the overwhelming amount of people reaching out to us wanting to know more about Between Me and the Night; the ReStart Best Student Project Award; etc. – made us want to keep this project alive and finish it, now thanks to LACE this is all possible.”

Between Me and the Night has been in development since 2012 and was Greenlit on Steam (Linux, Mac, Windows PC) in February 2014. It’s getting musical treatment by Super Hexagon composer Chipzel, and Deadlight and Rime composer David Garcia.