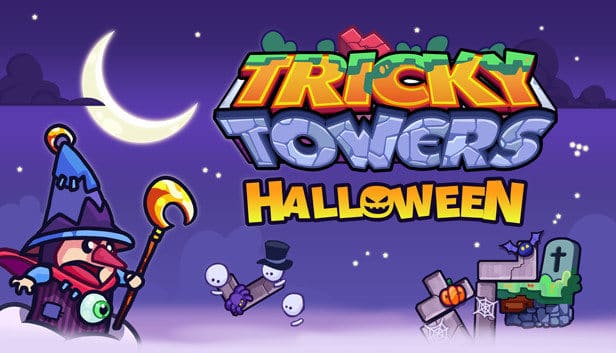 While celebrating the coming of Halloween. Developer WeirdBeard Games are releasing a free brick skin pack for Tricky Towers. Which is available to get into the spirit of the holiday before October 31st. So the Halloween bricks feature Halloween favourites like pumpkins, bats and spiders. They are part of the latest Tricky Towers update on Steam. Which is currently discounted 50% for Linux, Mac and Windows.

The Tricky Towers Tournament Pack
Perfect for any time of the year when friends and family will be getting together. Also the Tricky Towers Tournament Pack is a printable set of goodies. Since anyone can host their own Tricky Towers tournament. Especially on Halloween, much better to gather some other people. That is you’re not into horror games. This way you relax on the couch and ride out any scares together. The pack comes with rules and a tournament roster. As well as a printable papercraft wizard crowns. And even an awesome 3D printable Super Tricky Towers Cup. If you really want a prize worthy of a champion wizard.

Grab your wizard’s robe and spell book. Time to use your engineering skills and build some Tricky Towers

Stack your bricks and use your spells to create the tallest stable tower. What self-respecting wizard wouldn’t want to show off their skills?

So match your tower wizardry against 4 others in local multiplayer. Challenge wizards around the world in an online battle of magics. Facing off in the games engineering mayhem. Try your skills in various tricky wizard trails and set a high score on the games leaderboards. Since the mayhem is playable on Linux, Mac and Windows.

Tricky Towers is available now with a 50% discount on Steam. Yet the Free Brick Skin is only available until October 31st.